Dear Reader of Inspiration by Email: This quick note is a reminder that the non-profit work of Enduring Word is donor supported. I appreciate your prayerful consideration of a generous year-end gift to support our work of providing free Bible resources world-wide. To give, please click here.  Thank you – David Guzik

Woe to those who go down to Egypt for help, and rely on horses, who trust in chariots because they are many, and in horsemen because they are very strong, but who do not look to the Holy One of Israel, nor seek the LORD! (Isaiah 31:1)

The threat was real and was approaching Jerusalem fast. It was the mighty Assyrian army, infamous for its cruelty and destruction. Because of this threat the leaders of Judah felt they had to do something, but sadly they did the wrong thing. More precisely, they were wrong in what they did and wrong in what they did not do. The Prophet Isaiah confronted both wrongs in this single verse. 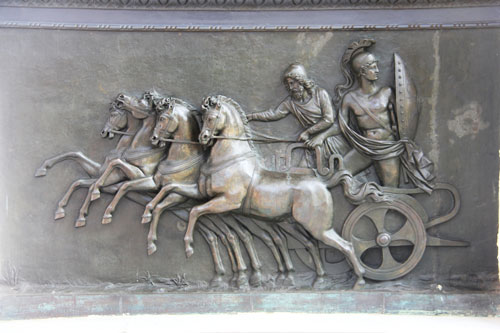 The first wrong was the sin of trusting in Egypt and their military might. The second wrong was the sin of not looking to the Holy One of Israel. Therefore he said, “Woe to those who go down to Egypt for help, and rely on horses, who trust in chariots.” God had called the tribes of Israel to a very special relationship with Him, and He promised to protect them in the Promised Land as they trusted in Him. Yet in this circumstance, the leaders of the Kingdom of Judah found it easier and better to go down to Egypt for help instead of trusting the God who was already with them.

To be fair, Judah felt they had a reason to trust in chariots. They looked at the chariot count of Egypt saw that they are many. So, surely many chariots could save Judah from Assyria and be their deliverance!

They also felt they had a reason to trust in horsemen. They inspected the horsemen of the Egyptian army and saw that they are very strong. Surely the strong horsemen of Egypt would deliver them!

While they could find these two reasons, yet they couldn’t seem to find a reason to trust in the Lord. It is important to see that in a sense they did not abandon faith. We might say that everybody lives by faith. Here, the leaders of Judah had plenty of faith, but they put that faith into the chariots and horsemen of Egypt.

It makes us think carefully about ourselves. Sometimes we tell ourselves that we need more faith when really we have plenty of faith; we just put our faith in the wrong things. In our own way, we trust in the chariots and horsemen of Egypt instead of trusting in the God who made a covenant promise to be our God, if we would be His people.

How much better to have the heart of the Psalmist in Psalm 20:7: Some trust in chariots, and some in horses; but we will remember the name of the Lord our God. Still further, our trust should only be in the Lord. I like what the old Puritan writer John Trapp said: “He that stands with one foot on a rock, and another foot upon a quicksand, will sink and perish as certainly as he that stands with both feet on a quicksand.”

Make sure that you have both feet on the rock of real trust in God.