He who sits in the heavens shall laugh;
The LORD shall hold them in derision. (Psalm 2:4)

We don’t often think of God as laughing, but Psalm 2 tells of a special reason why God laughs. Here, God laughs because man thinks he can plot and work against the Almighty with any hope of success. It says in the first few verses of the Psalm:

Why do the nations rage, and the people plot a vain thing? The kings of the earth set themselves, and the rulers take counsel together, against the LORD and against His Anointed, saying, “Let us break Their bonds in pieces and cast away Their cords from us.” (Psalm 2:1-3)

God’s response? “He who sits in the heavens shall laugh.” God looks at the way man plots against Him and He laughs. God isn’t afraid or confused or depressed about the opposition of man. God laughs at it. 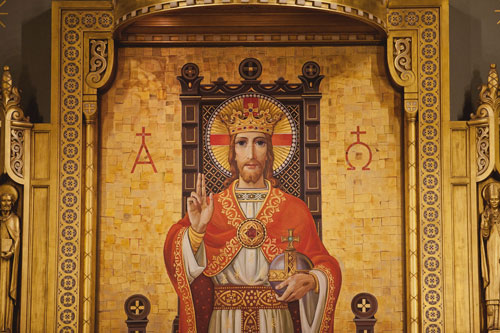 God laughs because He sits in the heavens. He sits as the Great King on a glorious throne. He doesn’t pace back and forth in the throne room of heaven, wondering what He should do next. God sits in perfect peace and assurance. He doesn’t even rise from where He sits; God simply laughs.

God laughs because He sits in the heavens. It isn’t an earthly throne He occupies; it is the throne of heaven with authority over all creation. What does heaven have to fear from earth?

Please notice that God does not laugh at the suffering of humankind, even their suffering as a result of sin. God laughs at the proud man or woman who thinks so highly of themselves that they will fight against God and seek to prevent His will.

Simply said, “The LORD shall hold them in derision.” Through the centuries many have opposed God and His Kingdom in Jesus Christ. Each one of these opponents have been and shall be frustrated and crushed.

An Example of God’s Laugh

A famous opponent of Christianity was the Roman Emperor Diocletian (AD 245-313). He was such a determined enemy of Christians that he persecuted them mercilessly and wanted to believe that he had defeated Christianity. He struck a medal with this inscription: “The name of Christianity being extinguished.”

Diocletian built monuments with inscriptions that said he had “extinguished the name of Christians” and had “abolished the superstition of Christ.”

Diocletian is dead and gone, now only a few paragraphs on the pages of history. The fame and glory of Jesus Christ is spread over all the earth. God laughs from heaven, and the LORD shall hold them in derision. Let this comfort your troubled heart today.