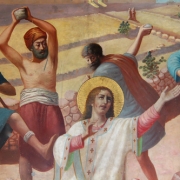 Then they cried out with a loud voice, stopped their ears, and ran at him with one accord; and they cast him out of the city and stoned him. And the witnesses laid down their clothes at the feet of a young man named Saul. (Acts 7:57-58)

Because it was all too much, they screamed. That is, they cried out with a loud voice. The Sanhedrin reacted quickly and violently. Jesus, before this same council, declared that He would sit at the right hand of God, and they had a similar reaction (Matthew 26:64-66). 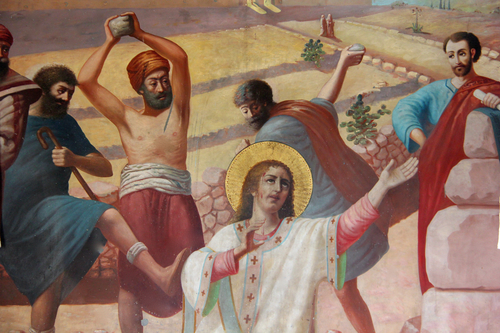 They did not only cry out with a loud voice. They also stopped their ears, and ran at him with one accord. The reaction of the Sanhedrin seems extreme but is typical of those who reject God and are lost in spiritual insanity. They wailed in agony and covered their ears at the revelation of God, which they regarded as blasphemy.

It is a dangerous thing to be religious apart from a real relationship with Jesus Christ. This fulfills what Jesus warned about in John 16:2-3: Yes, the time is coming that whoever kills you will think that he offers God service. And these things they will do to you because they have not known the Father nor Me.

Then they cast him out of the city and stoned him: The extent of their rage was shown by their execution of Stephen, which was done without regard for Roman law, and which was performed according to traditional Jewish custom (stoning).

In all this, the witnesses laid down their clothes at the feet of a young man named Saul. A man named Saul was the supervisor of the operation. The phrase “young man” literally means, “a man in his prime.” He was almost certainly a member of the Sanhedrin, and he heartily approved of Stephen’s execution.

Stephen was the first Christian martyr. His death was a shock to the early church. Yet God did not abandon Stephen; Jesus received him in glory and used his death to bring many into the kingdom. The saying of the early church proved true: the blood of the martyrs became the seed of the church’s harvest.

In Jesus, our sorrows need never be wasted.

Foundations for Leadership
Scroll to top