It took a three-year siege, but eventually the king of Assyria conquered Israel, the kingdom made up of the ten northern tribes. We read, the king of Assyria went throughout all the land, and went up to Samaria and besieged it for three years. This was a long, dedicated campaign to finally crush the rebellious kingdom of Israel, who had defied the power of the Assyrian Empire. Though it took a three-year siege, it was worth it to the Assyrians. 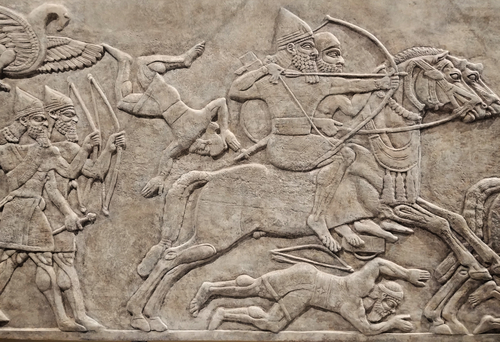 The walls surrounding Samaria were good – good enough to keep the enemy out for three years. But the strength of the walls could not stand against the judgment of God, and the Assyrian army was in fact an instrument of God’s judgment against Israel. This shows us that when God brings His judgment, He may use human instruments to do it.

When the capital city of Samaria fell, they then carried Israel away to Assyria. This is what the Assyrians did regarding many of the nations they conquered. They deported all but the very lowest classes back to the key cities of their empire, either to train and utilize the talented or to enslave the able.

So, 200 years and 19 kings after the time of Solomon (the last king over a united Israel), the Northern Kingdom of Israel fell. It was not because the God of Israel was unable to help them, but because they had so forsaken God and ignored His guidance and correction that He finally stopped actively protecting them and let them rot and degrade according to their desire.

As they carried Israel away to Assyria, they followed their typical custom.  When the Assyrians depopulated and exiled a conquered community, they led the captives away on journeys of hundreds of miles, with the captives naked and attached together with a system of strings and fishhooks pierced through their lower lips. God made sure they were led in this humiliating manner through the broken walls of their conquered cities (Amos 4:2-3). This shows another principle of God’s judgment: When it comes, it may be humiliating and degrading.

This should give us a sober fear of the judgment of God. Israel had enjoyed a heritage of rich blessing in the past, but that in itself would not protect them from God’s judgment if they continued to mock God and rebel against Him.

More so, it should make us grateful for the work of Jesus. When Jesus died on the cross as our substitute, He took the judgment we deserved. God did it through human instruments, and Jesus was (humanly speaking) humiliated on the cross. Jesus bore all that so that those who put their trust in Him would never face God’s judgment.

Lions of Judgment
Scroll to top