Ephraim has mixed himself among the peoples; Ephraim is a cake unturned. Aliens have devoured his strength, but he does not know it; yes, gray hairs are here and there on him, yet he does not know it. And the pride of Israel testifies to his face, but they do not return to the Lord their God, nor seek Him for all this. (Hosea 7:8-10)

God likes to talk in pictures. All through the Bible, God uses word-pictures to tell us how He sees things. Hosea chapter 7 is filled with word pictures describing the sinful character of ancient Israel in the days of the Prophet Hosea. In this chapter, God says Israel was like:

– A thief, a band of robbers
– An adulterous wife
– A hot oven
– A silly dove

But my favorite word-picture from Hosea 7 is found in verse 8 through 10, where God called Israel a cake unturned. The idea is of a “half-baked” cake. In that day, bread was often prepared as a cake that was cooked on both sides, something like a pancake. In thinking they could serve both the Lord and idols, Israel was like an unturned pancake – burned on one side and uncooked on the other. 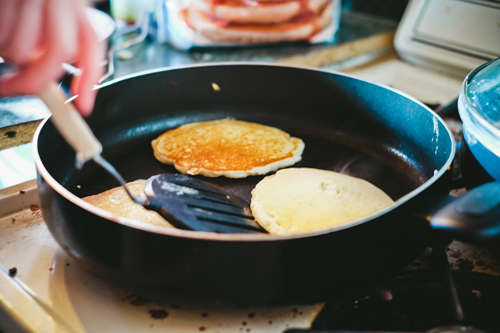 This vividly describes the spiritual and moral condition of many people. They are overexposed to some things – perhaps the things of the world, the flesh, and the devil. Yet they are underexposed to other things – the things of God and His Spirit. Therefore, they are like a cake unturned. If you have ever made pancakes, you know what can be done with cakes that are burned on one side and uncooked on the other – nothing. You can’t fix it by flipping it over, because the one side is still burned. In the same way, when someone is overexposed to the world and underexposed to God, God can’t do much with that person.

To describe the self-deception of Israel, Hosea used another word-picture: “Yes, gray hairs are here and there on him, yet he does not know it.” In Hosea’s day, Israel was as foolish as an old man who thought and acted like he was still young. If you have ever seen the type, you know what Hosea meant. We think it is a joke when an old, gray-headed man dresses in the most modern fashions and uses the slang of young people. We wonder, “Who does this old guy think he is fooling?” God thinks the same thing about us when we deceive ourselves about our spiritual condition.

Considering how easily we deceive our self, and how our sin can be apparent to everyone but us, Israel’s condition wasn’t unusual. It was said of Samson after Delilah cut his hair: “But he did not know that the Lord had departed from him” (Judges 16:20). This is where the people of Israel were and where some followers of God are today. They are far from God and already suffering the effects, but they can’t see it. Ask God to open your eyes today – not only to see Him, but also to see your true spiritual condition. Seeing both clearly make the path to true spiritual health.