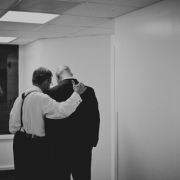 And when Saul had come to Jerusalem, he tried to join the disciples; but they were all afraid of him, and did not believe that he was a disciple. But Barnabas took him and brought him to the apostles. (Acts 9:26-27a)

A few years after he was wonderfully converted, Saul (also known as Paul) made a visit to Jerusalem. The visit didn’t go as he had hoped, at least not at first: he tried to join the disciples; but they were all afraid of him. It seems strange that Christians in Jerusalem were so suspicious of Saul even three years after his conversion. They perhaps thought that he was part of an elaborate and extended plot. Maybe they were reluctant to embrace such a dramatic conversion without seeing it with their own eyes. Simply, they did not believe that he was a disciple.

That had to hurt. At this point, some people might turn their back on Jesus Christ. We could imagine Saul saying, “I’ve been serving the Lord for three years, preaching Jesus Christ, enduring assassination attempts and death threats. Now you don’t want to accept me as a Christian? Do you call this the love of Jesus? Forget it!”

Yet in Acts 9:27 we read something wonderful: Barnabas took him and brought him to the apostles. Barnabas simply extended the love of Jesus to Saul, and as Saul (Paul the Apostle) would write later, love believes all things (1 Corinthians 13:7). Barnabas said, “I believe you, Saul. I believe you had a terrible past and I know Christians were really afraid of you. But I believe Jesus has changed your life, and for three years you’ve lived as a changed man.”

Thank God for people like Barnabas, who will welcome people into the family of God with simple friendship.

If that is you, please don’t despair. You’re in good company, and God is big enough, wise enough, and sovereign enough to bring blessing and good even out of a painful season.

Here’s my prayer for you: that if you are in that painful place, God would send you a Barnabas – someone to hear you, help you, and love you in the name of Jesus. I also pray that God would help you to be a Barnabas to someone else.