“Because for the work of Christ he came close to death, not regarding his own life, to supply what was lacking in your service toward me.” (Philippians 2:30)

The Christians in Philippi had a close relationship with the Apostle Paul. They even sent a special messenger to Paul, carrying encouragement and support from the Philippians to Paul while he was still is prison. This messenger, named Epaphroditus, became sick while on his mission.

The noble heart of Epaphroditus was evident because he put the work of Jesus first, and his own personal safety and concern second. He was willing to do something extreme for God. Paul even wrote that Epaphroditus didn’t regard his own life – but when he wrote that, he used a special phrase worthy of our notice. 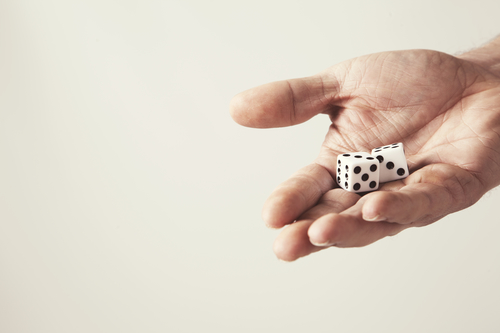 The phrase “not regarding his life” was used in Paul’s day as a gambler’s word. It meant to risk everything on the roll of the dice. Paul meant that for the sake of Jesus Christ, Epaphroditus was willing to gamble everything. What are we willing to risk for Jesus? People today will take incredible risks for fame, fortune, or just an adrenaline rush. Yet are we willing to risk anything for God? Perhaps that is a good way to find out just what our God is – our God is whatever we will take the biggest risk for. With that in mind, what is your God?

In the days of the Early Church there was an association of men and women who called themselves “the gamblers,” taken from this same Greek word used in Philippians 2:30. It was their aim to visit the prisoners and the sick, especially those who were ill with dangerous and infectious diseases. Often, when plague struck a city, the heathen threw the dead bodies into the streets and fled in terror. But the gamblers – these Christians who risked everything for Jesus – buried the dead and helped the sick the best they could, and so risked their lives to show the love of Jesus.

When a gambler takes a risk, there is always a probability that he will fail. The odds are always in favor of the house. But when we are God’s “gamblers” – as Epaphroditus was – we can never lose. What is God calling you to do that seems risky? For some of us, obedience in a particular area seems too risky – it’s too big of a gamble. But the only sure way to win is to put your wager on God and risk it all. We can never lose when we bet on God.