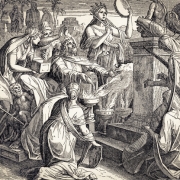 But he walked in the way of the kings of Israel; indeed he made his son pass through the fire, according to the abominations of the nations whom the LORD had cast out from before the children of Israel. And he sacrificed and burned incense on the high places, on the hills, and under every green tree. (2 Kings 16:2-3)

2 Kings 16 begins by telling us about the reign of Ahaz, who was the son of a good king (Jotham) and the grandson of a better king (Uzziah). Yet, for some reason, Ahaz refused to walk in the example of his father and grandfather. Instead, he walked in the way of the kings of Israel. 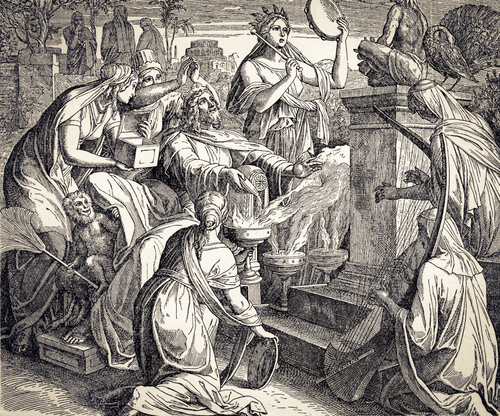 Ahaz had plenty of good examples, but he embraced the ungodly ways of the northern tribes. The southern tribes of the Kingdom of Judah had a mixture of godly and ungodly kings; the Kingdom of Israel had onlyungodly kings, and Ahaz followed their pattern. This is the first time we see Judah imitating Israel’s apostasy.

It was so bad that King Ahaz made his son pass through the fire. This describes Ahaz’s participation in the worship of Molech, a pagan god. Molech was honored by heating a metal statue representing the god until it was red hot. They then placed a living infant on the outstretched hands of the statue, while beating drums drowned out the screams of the child until it burned to death.

I know that is a terrible thing to read, and I almost sorry to write it. But it’s important to know how evil Ahaz was, and how sad it was that he rejected the good examples of his father and grandfather and embraced the evil of the norther kingdom.

Long before, God pronounced the death sentence against all who worshipped Molech, saying: I will set My face against that man, and will cut him off from his people, because he has given some of his descendants to Molech, to defile My sanctuary and profane My holy name (Leviticus 20:3).

One of the great crimes of the northern tribes of Israel was their worship of Molech, and it led to the Assyrian conquest (2 Kings 17:17). King Manasseh of Judah gave his son to Molech (2 Kings 21:6). Up to the days of King Josiah of Judah, Molech worship continued, because he destroyed a place of worship to that idol (2 Kings 23:10).

In imitating the ways of the northern tribes, Ahaz really imitated the ways of the Canaanites. All this was according to the abominations of the nations whom the LORD had cast out from before the children of Israel. The Canaanite nations that occupied Canaan before the time of Joshua also practiced this terrible form of human and child sacrifice. God would judge Judah for their continued practice of these sins.

It all began with a man following a bad example. What examples will you choose to follow? Ask God for the wisdom and strength to follow the best examples.

Promises Made and Received
Scroll to top