In sports, there is nothing more frustrating than losing to someone who isn’t as good as you are. Sometimes the victory is won by the player or team who isn’t as talented or as trained, but on that day, the ball bounces their way. It’s different when you lose to someone better than you are. You can walk off the field or the court knowing that you’ve played your best game, you worked hard and did well – you were just overmatched. The better player or team won. 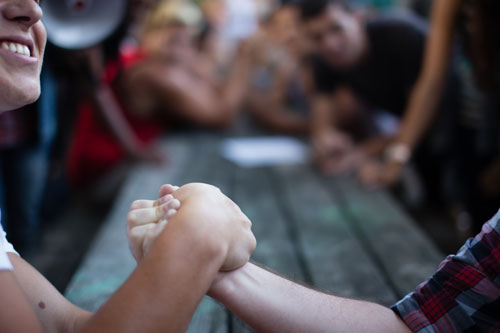 In Genesis 32, Jacob had one of the most fantastic athletic contests of all time – a wrestling match with God. We may speak spiritually of wrestling with God in prayer, or wrestling in spiritual warfare, but Jacob’s wrestling was physical as well as spiritual. He was locked in competition with God in human form – the Man of Genesis 32:24 was God Himself who wrestled with Jacob.

On a physical level, Jacob lost. God touched his hip and took him out of the fight. Having wrestled all night, Jacob limped back to his family that morning a loser. But Jacob won spiritually; he clung to God until blessing was promised (Genesis 32:29).

Jacob was a satisfied loser. A better Man beat Him. Sometimes that’s what it takes for us to receive God’s blessing. We need to square off with God, man to Man, have Him beat us, and then honor Him as our Lord. We then may look at God as our Superior, as the competitor who has fairly and decisively bested us. As the winner of every competition, God deserves our utmost respect. And as a loser in the contest, I can still hold my head high. I have been won over by a better Man.

In what ways do I wrestle with God? There are many opportunities for me to resist what God wants to do with me. I may not physically strain against Him as Jacob did, but my resistance is just as real, and my hopes of resisting God successfully are destined to be disappointed.

Losing when I struggle against God is a good thing. It brings me back to something I need to remember: that God is the Creator and I am His creature. There is a comfort in knowing and walking in my place as His creation. I can look up to God and honor Him as the One who genuinely deserves to be my Lord. He has won me over.

Today, you can pray something like this: “Lord, help me today to see ways that I am resisting you. In those areas, please win me over. And when I find you winning me over, let me look for Your blessing in my losing.”