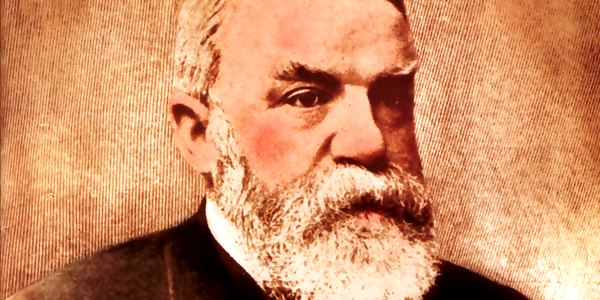 Moody Was a Fully Surrendered Man

On February 5, 1837, there was born of poor parents in a humble farmhouse in Northfield, Massachusetts, a little baby who was to become the greatest man, as I believe, of his generation or of his century – Dwight L. Moody. After our great generals, great statesmen, great scientists and great men of letters have passed away and been forgotten, and their work and its helpful influence has come to an end, the work of D.L. Moody will go on and its saving influence continue and increase, bringing blessing not only to every state in the Union but to every nation on earth. Yes, it will continue throughout the ages of eternity.

My subject is “Why God Used D.L. Moody,” and I can think of no subject upon which I would rather speak. For I shall not seek to glorify Mr. Moody, but the God who by His grace, His entirely unmerited favor, used him so mightily, and the Christ who saved him by His atoning death and resurrection life, and the Holy Spirit who lived in him and wrought through him and who alone made him the mighty power that he was to this world. Furthermore: I hope to make it clear that the God who used D.L. Moody in his day is just as ready to use you and me, in this day, if we, on our part, do what D.L. Moody did, which was what made it possible for God to so abundantly use him.

But how was it that D.L. Moody had that power of God so wonderfully manifested in his life? Pondering this question it seemed to me that there were seven things in the life of D.L. Moody that accounted for God’s using him so largely as He did.

The first thing that accounts for God’s using D.L. Moody so mightily was that he was a fully surrendered man. Every ounce of that two hundred and-eighty-pound body of his belonged to God; everything he was and everything he had, belonged wholly to God. Now, I am not saying that Mr. Moody was perfect; he was not. If I attempted to, I presume I could point out some defects in his character. It does not occur to me at this moment what they were; but I am confident that I could think of some, if I tried real hard. I have never yet met a perfect man, not one. I have known perfect men in the sense in which the Bible commands us to be perfect, i.e., men who are wholly God’s, out and out for God, fully surrendered to God, with no will but God’s will; but I have never known a man in whom I could not see some defects, some places where he might have been improved.

No, Mr. Moody was not a faultless man. If he had any flaws in his character, and he had, I presume I was in a position to know them better than almost any other man, because of my very close association with him in the later years of his life; and furthermore, I suppose that in his latter days he opened his heart to me more fully than to anyone else in the world. I think He told me some things that he told no one else. I presume I knew whatever defects there were in his character as well as anybody. But while I recognized such flaws, nevertheless, I know that he was a man who belonged wholly to God.

The first month I was in Chicago, we were having a talk about something upon which we very widely differed, and Mr. Moody turned to me very frankly and very kindly and said in defense of his own position: “Torrey, if I believed that God wanted me to jump out of that window, I would jump.” I believe he would. If he thought God wanted him to do anything, he would do it. He belonged wholly, unreservedly, unqualifiedly, entirely, to God.

If you and I are to be used in our sphere as D.L. Moody was used in his, we must put all that we have and all that we are in the hands of God, for Him to use as He will, to send us where He will, for God to do with us what He will, and we, on our part, to do everything God bids us do.