Paul, a bondservant of God and an apostle of Jesus Christ, according to the faith of God’s elect and the acknowledgment of the truth which accords with godliness. (Titus 1:1)

The Apostle Paul had many associates and co-workers. One of them was a younger man named Titus. They worked together spreading the good news of Jesus Christ and establishing churches among the believers on the island of Crete. 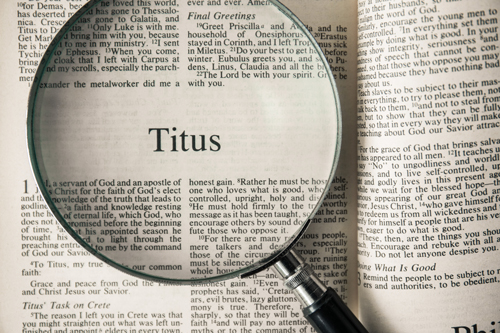 The day came when Paul had to leave, and Titus was left behind to continue a difficult work. Paul wanted to instruct and encourage his young co-worker, so he wrote this letter to him. Inspired by the Holy Spirit, this letter was not only helpful for Titus, but also for God’s people through all ages.

Because this writing was inspired by the Holy Spirit and rightfully including among the writings of the New Testament, each word and phrase has depth and meaning. We can learn from both its broad themes and individual words and phrases. The first line of the letter – Titus 1:1 – is a good example of how, under the inspiration of the Holy Spirit, so much can go into a few words.

First, we see how Paul referred to himself: both a bondservant of God and an apostle of Jesus Christ. It is hard to think of a lower title than bondservant. The original word speaks not only of a low slave (one Greek scholar called it “the most abject, servile term in use among the Greeks for a slave”), it was also the word for a slave by choice. Paul took glory in such a humble title – he was a willing servant, a slave, of God. Yet he was also an apostle, a uniquely designated ambassador of God, one of those commissioned by God to lay that one-time foundation of the church (Ephesians 2:20).

Paul said that his calling as a bondservant and an apostle was according to the faith of God’s elect and the acknowledgment of the truth. His calling wasn’t because of the faith of God’s elect, but in harmony with the faith (the belief, the truth) shared among God’s elect. One way we can know who the elect are is that they make this acknowledgment of the truth – they believe and confess the truth about who Jesus is and what He came to do for us, especially His work on the cross.

There is at least one more important thought in this verse. Paul was careful to write that the truth acknowledged by God’s elect accords with godliness. It is consistent with godly, moral life. An ungodly life, marked by sin and moral compromise, doesn’t really acknowledge the truth of God.

This truth brings us to one of the big themes of Paul’s letter to Titus: the link between sound doctrine and godly living. Truth and godliness should always be in one accord. From time to time we need to do the self-assessment: Do I believe the truth, especially about Jesus and His work for me? Do I walk in godliness, consistent with the truth and nature of God? We must always remember that both are important, and there is a real connection between right belief and right living.