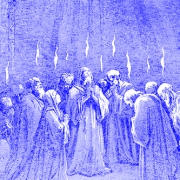 Then there appeared to them divided tongues, as of fire, and one sat upon each of them. And they were all filled with the Holy Spirit. (Acts 2:3-4a)

As the 120 disciples of Jesus gathered in the upper room, a remarkable thing happened. First, there was an unusual sound, something that sounded like a strong wind, and the sound filled the whole house (Acts 2:2).

Then, after the sound of the wind had started, they saw another remarkable thing: there appeared to them divided tongues as of fire, and one sat upon each of them. A flame appeared above the head of every disciple. Probably, the description divided tongues, as of fire has the sense that the flames were active and flickering – appearing as if they were burning, but leaving no mark, even as one sat upon each of them. 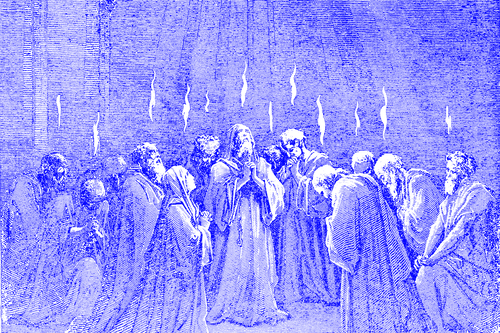 This amazing occurrence probably should be connected with John the Baptist’s prophecy that Jesus would baptize you with the Holy Spirit and with fire (Matthew 3:11).

Through the Bible, the idea behind the picture of fire is usually purification, as a refiner uses fire to make pure gold; or fire can burn away what is temporary, leaving only what will last. This is an excellent illustration of the principle that the filling of the Holy Spirit is not just for abstract power, but for purity.

In certain places in the Old Testament, God showed His special pleasure with a sacrifice by lighting the fire for it Himself – that is, fire from heaven came down and consumed the sacrifice. The experience of the followers of Jesus on Pentecost is another example of God sending fire from heaven to show His pleasure and power, but this time, it descended upon living sacrifices (Romans 12:1).

The Holy Spirit sat upon each of them. One commentator (A.T. Pierson) said there was a deliberate meaning behind that word sat – that it has the idea of permanence of position and a lasting condition. That idea is important.

Under the Old Covenant, the Holy Spirit rested on God’s people more as a nation, that is, Israel. But under the New Covenant, the Holy Spirit rests upon God’s people as individuals – the tongues of fire sat upon each of them. This strange phenomenon had never happened before and would never happen again in the pages of the Bible, but was given to emphasize this point: that the Spirit of God was present with and in and upon each individual.

Today, we shouldn’t expect to hear the sound of the wind or see a tongue of fire when the Holy Spirit moves among God’s people. But we can and should expect to be filled with the Spirit as we receive in faith and let Him refine and purify us.

Reasons to Believe
Scroll to top