I affirm, by the boasting in you which I have in Christ Jesus our Lord, I die daily. (1 Corinthians 15:31)

For most of us, it doesn’t seem like anything to brag about. I suggest that Paul turned the Corinthian obsession with image and success on its head. They bragged about their intellect and their secret knowledge and their spirituality and even their great love, but they would never brag about dying daily. 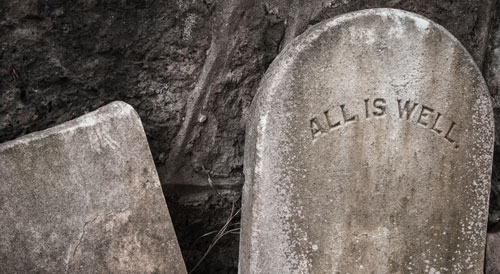 The Greek commentator Vincent said that the sense of “I die daily” is “I am in constant peril of my life.” Paul’s life was so on the edge for Jesus Christ that he could say I die daily. His life was always on the line; there were always people out to kill him. An example of this is in Acts 23:12-13, when more than forty men took a vow that they would neither eat nor drink until they had killed Paul. With enemies like that, no wonder Paul could say, I die daily – and that was his boast!

It is important to understand that when Paul says, “I die daily” he did not mean the spiritual identification he had with the death of Jesus. He did not speak of the spiritual putting to death of the flesh. He meant the constant imminent danger to his physical life. It is important and useful for a Christian to daily reckon themselves dead to sin with Jesus Christ (as in Romans 6:11, Likewise you also, reckon yourselves to be dead indeed to sin, but alive to God in Christ Jesus our Lord). But to use this statement “I die daily” to support that truth isn’t correct, because in context Paul wrote about the danger to his physical life.

That made sense for Paul and perhaps also for those brave Christians around the world today who face persecution. But what about us? How can we die daily in this sense? Charles Spurgeon gave some ways to do this in a sermon titled Dying Daily.

– Carefully consider the certainty of death
– Hold this world with a loose hand
– Every day, seriously examine your hope and experience of God
– Just as you did at conversion, come every day to the cross of Jesus as a poor and guilty sinner
– Live in such a manner that you would not be ashamed to die at any moment
– Have all your practical affairs in order so that you are ready to pass from this world to the next

This week, ask God to help you to die daily – and do it in full hope and assurance of our resurrection.