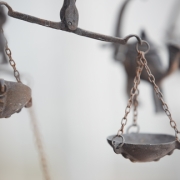 But Peter said to him, “Your money perish with you, because you thought that the gift of God could be purchased with money! You have neither part nor portion in this matter, for your heart is not right in the sight of God. Repent therefore of this your wickedness, and pray God if perhaps the thought of your heart may be forgiven you. For I see that you are poisoned by bitterness and bound by iniquity.” (Acts 8:20-23)

God moved powerfully in the city of Samaria, and one of those touched was a sorcerer named Simon. After proclaiming his belief and being baptized, Simon saw the power of God at work and asked if he could buy the same power.

Peter responded to Simon strongly, saying “Your money perish with you.” Simon was so wrong that he deserved this strong rebuke. Peter’s bold discernment must have been difficult or awkward to watch. Few people today would rebuke what seemed to be a young Christian so strongly. Yet Peter was willing to tell Simon the truth in love, though it was hard for Simon and those standing by to hear it.

Peter also summarized Simon’s sin: You thought the gift of God could be purchased with money! Of course, Simon was wrong to think this. The gifts of God are received freely from Him, by faith. What we receive from God will affect what we do with our money; but we can’t purchase the gifts of God with money.

Peter’s rebuke to Simon leads to an important and interesting question – was Simon a true Christian, genuinely born again?

Simon gave some evidence of conversion – at least to outward observation.

– Simon seemed to believe in the preaching of Philip (Acts 8:13).
– Philip received Simon as some kind of follower (Acts 8:13).
– Simon attended meetings of Christians (Acts 8:18).

For these reasons, Philip saw Simon as a Christian – a follower of Jesus – and baptized him (Acts 8:13). Like us today, Philip could not actually see into Simon’s spiritual heart and know with complete certainty that he was sincere in his faith; but he had demonstrated enough to make his proclamation of faith credible.

Yet, it is possible to take Peter’s statement “You have neither part nor portion in this matter, for your heart is not right in the sight of God” as evidence that Simon was not a true convert with repentance and sincere faith. The case of Simon is a warning that to truly be right with God, it isn’t enough to claim a belief in Jesus and do a few “Christian things.” We must be born again, and the truth of our new life will be seen in our life and seen over time.

This warning is found in 2 Peter 1:10: Therefore, brethren, be even more diligent to make your call and election sure. We aren’t saved by what we do, but the reality of our salvation is seen in how we live. Simon seemed to believe; his life showed otherwise.

Big and Bigger – Encouragement from Psalm 25
Scroll to top