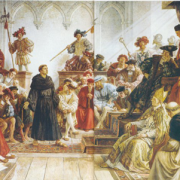 And it came to pass, on the next day, that their rulers, elders, and scribes, as well as Annas the high priest, Caiaphas, John, and Alexander, and as many as were of the family of the high priest, were gathered together at Jerusalem. And when they had set them in the midst, they asked, “By what power or by what name have you done this?” (Acts 4:5-7)

Only a few times in my life have I stood before a judge or before angry people in authority. I have been in court for a few traffic tickets once for small-claims court, but nothing too stressful. It’s hard for me to imagine what Peter and John felt at this moment.

The air was filled with stress and tension when they stood before all kinds of officials and authorities: rulers, elders, and scribes, as well as Annas the high priest, Caiaphas, John, and Alexander, and many from the family of the high priest. Just two humble disciples of Jesus on accused and examined before all these important people! 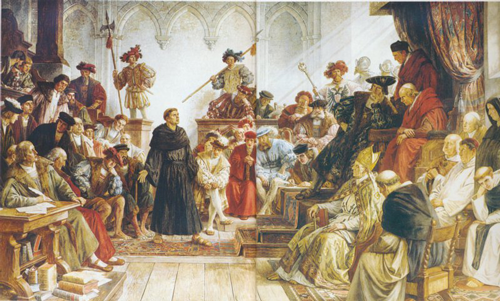 In 1521, when Martin Luther defended his teachings at the Diet of Worms he stood before some intimidating people: Charles V, the Emperor of the Holy Roman Empire. There were also 24 dukes; 30 archbishops, bishops, and abbots; 7 ambassadors and papal nuncios. In all there were 206 persons of rank sitting in judgment of Martin Luther. Imagine being judged by so many important people!

In Acts 4, the important men asked Peter and John: By what power or by what name have you done this?It was as if they said, “This miracle is clearly beyond your power – so who was really responsible for this?”

We can say that in itself, this was a perfectly legitimate question to ask. Together, these important men were the guardians of the Jewish faith. It was natural and appropriate for them to be concerned about what was taught on the temple mount. If someone was spreading dangerous lies or deception, it was their job to stop them.

The problem was not with their investigation, but with how they did it. They did it with intimidation and threats instead of an honest search for truth. No one is beyond accountability, and it was not wrong to call Peter and John to account for all the uproar on the temple mount. But how you call someone to account makes a big difference.

These important men also were wrong regarding what they did with the results of their investigation as the rest of Acts 4 will show.

Maybe this week you will be responsible for investigating something or calling someone to account. If so, the do it – but take care to do it in the right way, without dishonest intimidation tactics and lack of concern for the truth.

Maybe this week you will be investigated by someone else or called to account. If so, they keep your eyes on Jesus and answer truthfully and boldly – just like Peter and John did.