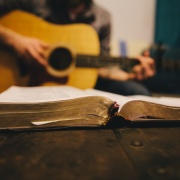 And Elisha said, “As the LORD of hosts lives, before whom I stand, surely were it not that I regard the presence of Jehoshaphat king of Judah, I would not look at you, nor see you. But now bring me a musician.” Then it happened, when the musician played, that the hand of the LORD came upon him. (2 Kings 3:14-15)

Three kings came to the prophet Elisha asking for God’s help and guidance. Their armies were stuck in the dry desert, facing a thirsty death before they ever got to battle. Elisha had no respect for the kings of Israel or Edom, but because of the presence of Jehoshaphat king of Judah, he agreed to seek God for their need.

When Elisha sought God for a prophetic word to speak to the three kings he said, now bring me a musician. It was a remarkable thing to say. When Elisha wanted to become more sensitive to the leading and speaking of the Holy Spirit, he asked for the service of a musician. 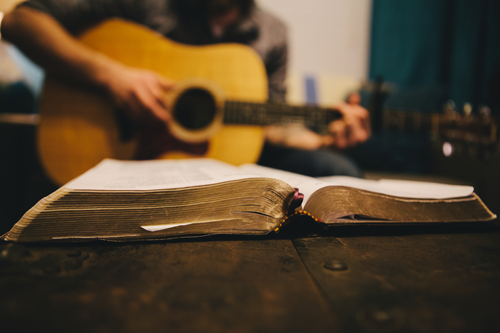 We know that Elisha was annoyed when the king of Israel first approached him on this matter (2 Kings 3:13). Perhaps this troubled his mind and spirit, and he needed some calm and God-honoring focus that music has the potential to bring. He sought to spiritually build up himself through “psalms and hymns and spiritual songs” (Colossians 3:16).

We don’t know the name of the musician, but when the musician played, the hand of the LORD came upon Elisha and he prophesied, bringing a promise of deliverance to the three kings. As the musician played the instrument, he probably never thought that God would use the notes and melody to bring a great spiritual and military victory. Yet, the musician did what he could do and God used it, and in at least a small way it helped to change history.

Our God is a singing God who loves music (Zephaniah 3:17, Mark 14:26). We are made in God’s image, so we have a natural attraction to music. We can do ourselves much spiritual good by listening to God-honoring music and by worshiping Him in song.

Make use of this great, wonderful, God-given, and God-blessed spiritual resource.

Wo ist Gott?
Scroll to top