“Now this thing became a sin, for the people went to worship before the one as far as Dan. He made shrines on the high places, and made priests from every class of people, who were not of the sons of Levi…So he made offerings on the altar which he had made at Bethel on the fifteenth day of the eighth month, in the month which he had devised in his own heart. And he ordained a feast for the children of Israel, and offered sacrifices on the altar and burned incense.” (1 Kings 12:30-31, 33)

After the days of King Solomon, the twelve tribes of Israel divided into two kingdoms. The first leader of the northern kingdom was a man named Jeroboam – one of the more interesting and tragic figures of Israel’s history. Jeroboam was anointed and called by God, but very quickly became more interested in holding onto power than in honoring the God who gave it to him.

When Jeroboam led the 10 northern tribes in their rebellion, he wanted to break every tie with the southern kingdom of Judah. However, the city of Jerusalem was in Judah – and it was to that place that all the children of Israel were commanded to bring their sacrifices. Afraid to allow his people to visit Jerusalem and Judah, Jeroboam set up his own altars at the cities of Dan and Bethel. 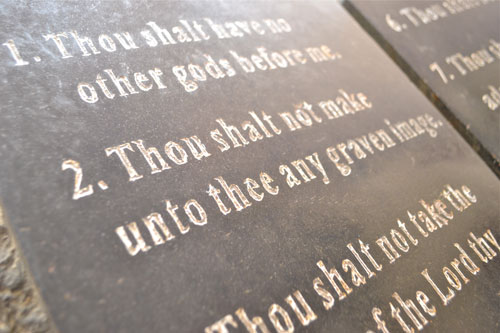 The Bible simply tells us, “Now this thing became a sin.” It was a sin when Jeroboam suggested it, but it was more of a sin when the people followed it. The people were so attracted to the religion of Jeroboam that they went as far as Dan (at the far north of Israel) to worship at the shrine of the golden calf there. Today, you can visit Israel and the site of ancient Dan and see exactly where the altar and golden calf stood.

Jeroboam went even further; “he made shrines on the high places.” He made more places of worship than the main centers at Bethel and Dan. These high places were even more convenient for the people.

Then he abolished the priesthood that God commanded, he “made priests from every class of people, who were not of the sons of Levi.” Jeroboam rejected the commandments of God regarding the priesthood of Israel, and established a priesthood of his own liking.

For the most part, the world today believes in the religion of Jeroboam. Not necessarily his particular expression of golden calves and high places, but a religion created according to its own taste. You could say that Jeroboam believed in “Jeroboamism” – it was all devised in his own heart. He was his own priest and created his own theology – basically, he created a god in his own image.

The tendency to do the same is in us all, but fortunately God has revealed to what He is like – He tells us in the Bible. We come to realize that my opinion about God isn’t any better or worse than that of anyone else – but what God says about Himself in the Bible reveals to us the God who is really there; not just the figment of my imagination or the creation of my own heart.

It is up to each of us to carefully examine our own idea of God and ask: “Did I make this myself or does God Himself tell me this in the Bible?” At the end of it all, all the gods we make in our own image are illusions – the God of the Bible is the one who is there, He is not silent, and He is the one who can rescue and help us.