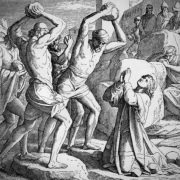 And they stoned Stephen as he was calling on God and saying, “Lord Jesus, receive my spirit.” Then he knelt down and cried out with a loud voice, “Lord, do not charge them with this sin.” And when he had said this, he fell asleep. (Acts 7:59-60)

Stephen was accused, arrested, and put on trial. He made his reply to the council, then Stephen suffered their angry and violent response. At the end of it all, they stoned Stephen as he was calling on God and saying, “Lord Jesus, receive my spirit.” Stephen’s life ended in the same way it had been lived: In complete trust in God, believing that Jesus would take care of him in the life to come.

As he died, Stephen said something with a loud voice – everyone could hear it. He said, “Lord, do not charge them with this sin.” Stephen showed the same forgiving attitude that Jesus had on the cross (Luke 23:34). Stephen asked God to forgive his accusers, and he made the promises loudly and publicly. 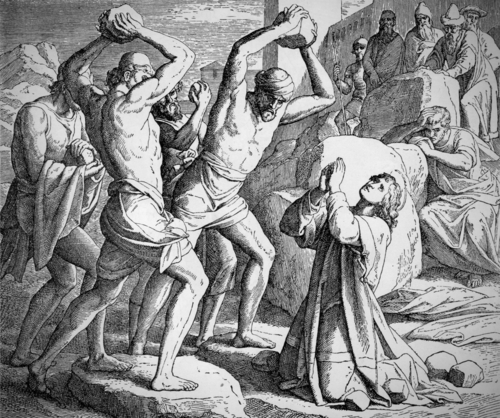 God answered Stephen’s prayer and used it to touch the heart of a man who energetically agreed with his stoning – even though the man didn’t know the prayer was being answered. When we get to heaven, we should thank Stephen for every blessing brought through the ministry of Saul of Tarsus.

God heard Stephen’s prayer, and Paul is the evidence of it. This first martyr of the Christian faith wasn’t a superman, but he was a man filled through all his being with the Holy Spirit. Many of us have little idea of how greatly we can be used of God as we walk in the power of the Holy Spirit. God even uses our suffering to His glory.

Look how Luke described the death of Stephen: “He fell asleep.” This speaks of the passing of Stephen as tenderly as possible. Instead of saying simply that he died, it says that he merely fell asleep – with the idea that he woke up in a much better world.

Stephen fell asleep, but the church now had to wake up. His death was just the beginning of greater persecution to come. It was going to be a battle filled with suffering, but also filled with glory to God.

Stephen was the first martyr of the Christian faith. I like the perspective of G. Campbell Morgan about Stephen’s martyrdom. He wrote that persecution doesn’t make martyrs, it reveals them. Stephen had the heart of a martyr – a witness, someone willing to die for the sake of his testimony to Jesus – before they stoned him. As Morgan wrote, Stephen “was the first martyr to seal his testimony with his blood.”

Most of us will never die the death of a martyr. But every one of us can live the life of a martyr, faithful to the testimony of who Jesus is and what He did to save us. Today, ask God to build that faithfulness in you.