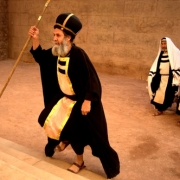 And when the king came back from Damascus, the king saw the altar; and the king approached the altar and made offerings on it. So he burned his burnt offering and his grain offering; and he poured his drink offering and sprinkled the blood of his peace offerings on the altar. (2 Kings 16:12-13)

King Ahaz of Judah gave his allegiance to the king of Assyria, and it was a shameful thing for a leader of God’s people to bow down to a pagan ruler. Ahaz also took note of the design of the altar at the idol temple in Damascus and brought that design back to Jerusalem. All of that was bad, but what Ahaz did next was worse. 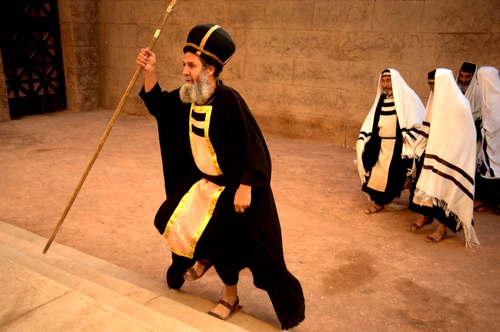 We read Ahaz burned his burnt offering and his grain offering; and he poured his drink offering and sprinkled the blood of his peace offerings on the altar. In Israel it was a strict law that kings should not be priests, and priests should not be king. But Ahaz was so bold in his rebellion that he served as a priest at the altar of his own design. Since he made his own place of worship, it also made sense that he would disregard God’s command that a king must not serve as a priest (Numbers 18:7).

It was so bad that even Urijah the priest agreed to accept King Ahaz as a priest (2 Kings 16:16). Urijah not only allowed Ahaz to do this; he participated in his evil and idolatrous plans. This was in dramatic contrast to the priests in the days of King Uzziah, who did all they could to restrain the madness of the king (2 Chronicles 26:17-18). It is a sad fact that corrupt political leaders have almost always been able to find corrupt religious leaders to help them.

All this was terrible. Yet even this, in the way of contrast, points us to Jesus Christ. One of the many sins of Ahaz was his demand to be a priest, which God clearly prohibited. That is, until the offices of king, priest, and prophet would all be combined in the messiah, Jesus Christ. He is the prophet, being God’s last word (Hebrews 1:1-2). Jesus is the priest, being a High Priest forever (Hebrews 3:1). Jesus is a king, being the king of kings (1 Timothy 6:15).

It’s also true that God will so work in His people that it is their destiny to be kings and priests with Jesus (Revelation 1:6 and 5:10). The glory that Ahaz pursued in a disobedient and ungodly way is actually reserved for the people of God. But it is only because they are, by faith, connected to Jesus Messiah – who is the true king and priest.