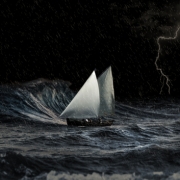 Therefore take heart, men, for I believe God that it will be just as it was told me. However, we must run aground on a certain island. (Acts 27:25-26)

Some two years before this, Paul was arrested in Jerusalem on the false charge that he had started a riot on the temple mount. In Roman custody, Paul eventually took his right as a Roman citizen and made an appeal to have his case heard by Caesar.

That meant Paul had to go to Rome, and the ship carrying him was caught in a terrible storm. For two weeks the ship was driven on the violent, storm-tossed waters of the Mediterranean Sea. The passengers and crew lost all hope and waited for the worst. 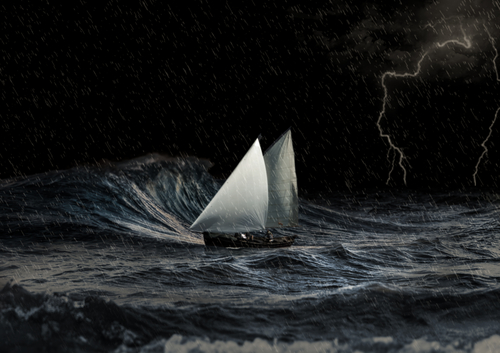 All of them – except for the Apostle Paul. During the literal storm, God sent an angel to Paul to bring good, encouraging news when all else seemed hopeless. Through the angel, God told Paul to put away fear and be confident that he would make it to Rome. God also promised Paul that everyone on the ship would survive.

Paul couldn’t keep this hope to himself. He had to pass it on. That’s when Paul spoke to all the passengers and crew and said, Therefore take heart. It was as if he said, “You have reason to take heart – God has given me assurance of your safety, and I believe God.”

Paul explained, I believe God that it will be just as it was told me. Paul’s confident words express the essence of what it means to put our faith in God and His word. God said it to Paul (through an angel) and Paul said, “I believe God.”

Paul didn’t say, “I believe in God.” Every demon in hell agrees with the existence of God. Paul declared his total confidence in God’s knowledge of his crisis and God’s promise in his situation.

Paul was not ashamed to say that he believed God, and he believed God when there was nothing else to believe. He couldn’t believe the sailors, the ship, the sails, the wind, the centurion, human ingenuity, or anything else – only God. This was not a fair-weather faith; he believed God amid the storm when circumstances were at their worst.

Paul’s unshakable confidence in God made him a leader among men, even though he was a prisoner.

Yet, Paul also told them the truth from God: we must run aground on a certain island. This was mixed news, and in these circumstances to run aground might be fairly called to shipwreck. Paul essentially said, “We’re all going to shipwreck on an unknown island, but everyone will be alright.”

God didn’t promise Paul, the crew, or the passengers an easy journey. It would be rough, but God would be with them and they would make it.

Today, can you hear God make the same kind of promise to you? Jesus promised to be with you until the end of the age (Matthew 28:20). Take that promise and say, “I believe God.”