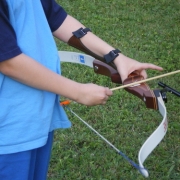 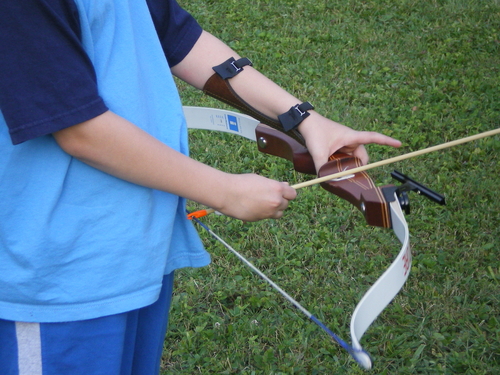 At that moment, Elisha told him to take a bow and some arrows. Through an illustration of arrows shot through a window, the prophet would show the king that the arrow of the LORD’s deliverance (2 Kings 13:17) was still present, and all Joash had to do was to shoot the arrow in faith.

King Joash began to do what the prophet told him to do. We can imagine the scene. Joash positioned himself in front of the window that faced the general direction of Syria. A servant brought him a bow and arrows. Elisha told him, “Put your hand on the bow.” As Joash put the arrow in place on the bow and stood in front of the window, something unexpected happened.

Elisha came up behind the king, and as Joash began to stretch the bow and prepare to shoot, Elisha put his hands on the king’s hands. Like a father helping his child to shoot a bow, the prophet would guide the hands of Joash.

I think this whole scene is amazing and we can look at it in greater depth. But just consider this part: The prophet’s hands on the king’s hands, drawing the arrow back on the bow and pointing it in the right direction.

If you aren’t strong enough to “bend the bow” for whatever God has in front of you to do or experience, then ask Jesus to fulfill the sense of this picture for you. As illustrated in this scene from 2 Kings 13, ask Jesus to put His hands on yours, to give you the strength to do what He tells you to do, and to give you the skill to aim it all in the right direction.

Many times, I have felt too weak to do what I should; but with His hands on mine, “I can do all things through Christ who strengthens me.” (Philippians 4:13)