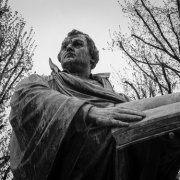 For in it the righteousness of God is revealed from faith to faith; as it is written, “The just shall live by faith.” (Romans 1:17)

In August of 1513, a German monk teaching at a seminary was lecturing on the book of Psalms, but his inner life was nothing but turmoil. In his studies, he came across Psalm 31:1: Deliver me in Your righteousness. The passage confused him; how could God’s righteousness do anything but condemn him to Hell as a deserved punishment for his sins? The monk had legal training before going into the monastery, so he knew what it meant that God is a righteous judge – a judge who would surely condemn the guilty. 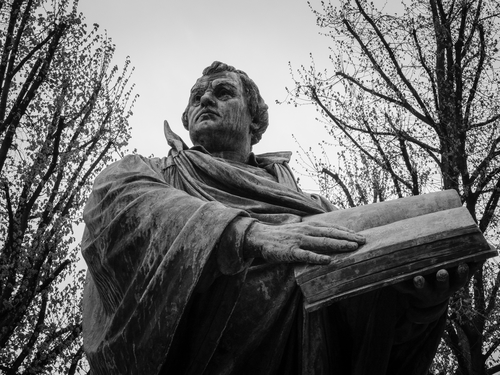 As he thought on this, the monk’s mind was repeatedly drawn to Romans 1:17, which says that in the gospel, the righteousness of God is revealed from faith to faith; as it is written, “The just shall live by faith” (the last portion is a quote from Habakkuk 2:4). The monk went on to say: “Night and day I pondered until…I grasped the truth that the righteousness of God is that righteousness whereby, through grace and sheer mercy, he justifies us by faith. Therefore I felt myself to be reborn and to have gone through open doors into paradise…. This passage of Paul became to me a gateway into heaven.” The German monk’s name was Martin Luther – and through understanding the good news of righteousness by faith, Martin Luther was born again, and the reformation began in his heart.

Many people don’t even think of God as being righteous. They suppose that God will just excuse all sin because He’s a forgiving kind of guy. Maybe God is mad at a few things, but not anything they do.

God is love; but He is also a completely righteous judge – He is just and fair. And it isn’t fair to let the guilty go. If someone is guilty, the righteousness of God seems to only condemn them. Therefore, if God is completely fair, it doesn’t seem like this fairness is our friend.

But here is the good news of the gospel: God has righteously dealt with our sin by putting on Jesus the punishment we deserve. Our sin is righteously and fairly punished – but it is judged in Jesus, not in us.

Because of this, God’s fairness now is our friend instead of our enemy. Because our sin is already settled in Jesus, it wouldn’t be fair for God to hold the same sins against us.

Because God is righteous, the believer in Jesus Christ and His work on our behalf can be confident He will never leave us or forsake us, and always be for us. Why not receive – and thank God for – all Jesus did for us to make God’s fairness, His righteousness, our friend instead of our enemy.

This is the good news – God’s righteousness delivers those who put their trust in Him, and not in themselves. Live by this faith and this righteousness today.