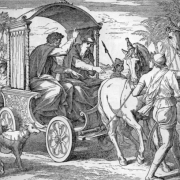 The place in the Scripture which he read was this:

“He was led as a sheep to the slaughter;
And as a lamb before its shearer is silent,
So He opened not His mouth.
In His humiliation His justice was taken away,
And who will declare His generation?
For His life is taken from the earth.”

So the eunuch answered Philip and said, “I ask you, of whom does the prophet say this, of himself or of some other man?” Then Philip opened his mouth, and beginning at this Scripture, preached Jesus to him. (Acts 8:32-35)

Isn’t it amazing when God perfectly arranges things? God told Philip to leave a successful season of ministry and go to a complete wilderness. Philip then saw a chariot, and the man in the chariot was reading Isaiah the prophet. Then the man asked for help in understanding – what a divine appointment! 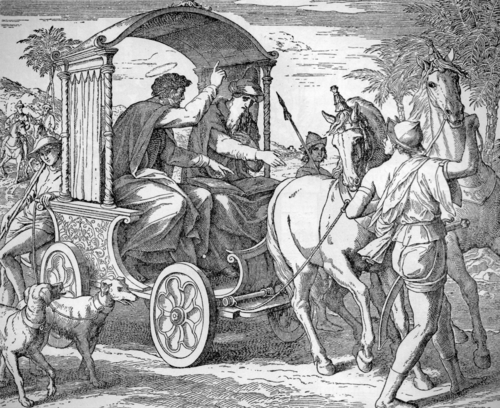 On top of all that, the man in the chariot read from the amazing prophetic passage of Isaiah 53, speaking of the Lord’s suffering servant. He read the words, He was led as sheep to the slaughter: In God’s wonderful planning, the Ethiopian was reading the amazing and specific prophecies in Isaiah 53 describing the sacrificial, sin-bearing work of the Messiah to come.

Then the man in the chariot asked an important question: I ask you, of whom does the prophet say this, of himself or of some other man? Regarding this passage from Isaiah 53:7-8, the Jews of that day had different ways they understood the identity of this suffering servant.

All three of these ideas could not be equally true. Though there was a lesser sense in which the Isaiah 53 passage was true of Israel as a nation and true of Isaiah as a prophet. Yet, there is no mistaking its main and greatest sense: Isaiah 53 speaks of the Messiah, Jesus Christ, in His role as the LORD’s Suffering Servant. It isn’t helpful to pretend that all interpretations of a Bible passage are equal, and Philip avoided this error.

It was a divine appointment that arranged all this in Acts 8. By other divine appointments, God has brought Jesus Christ to you. This same Jesus suffered as a servant for you. By faith, receive and cherish today all that He sacrificed to bring you into right relationship with God.