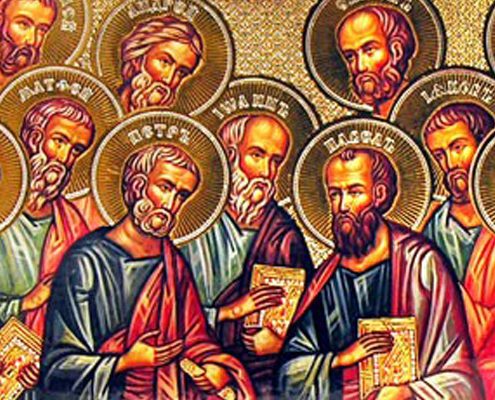 “And in Jesus Christ His only Son, our Lord.”

The Apostle’s Creed is an ancient and reliable summary of basic Christian beliefs. It begins with God the Father: “I believe in God the Father Almighty, maker of heaven and earth.” In the second paragraph, it speaks of Jesus of Nazareth, God the Son.

Second, the creed says that Jesus Christ is our Lord. Here, the creed looks back to majestic passages of Scripture like Philippians 2:9-11, which describe Jesus Christ as Lord. Click here for a closer look at this passage. This also clearly states that Jesus is God by simply calling Him Lord. In the Bible the earliest Christians used – which was the Greek translation of the Old Testament known as the Septuagint – the word used to translate the holy name of God was kurios. When the Bible says that Jesus Christ is Lord, it uses the same word. It couldn’t say it any more clearly or powerfully: “You read about this ‘Lord’ in the Old Testament. Jesus Christ is this ‘Lord.’”

We also should not miss the significance that at a later time in the Roman Empire, nearly all residents of the Empire were required to swear an oath of allegiance to the Emperor, declaring that Caesar is Lord, and they had to burn a pinch of incense to an image of the emperor. Though the Roman government saw this only as a display of political allegiance, Christians rightly understood it as idolatry – and they refused to participate, often paying with their lives. For them, there was only one Lord. Is it the same way for you? Can you say that you believe in Jesus Christ His only Son, our Lord?

A Man, But More Than A Man
Scroll to top