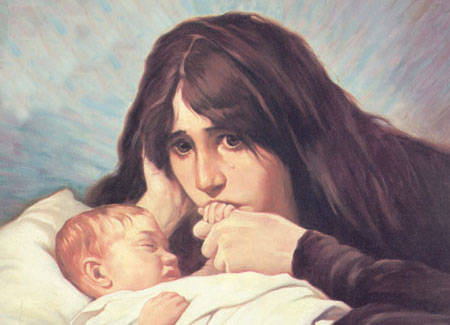 A Man, But More Than A Man

“Who was conceived by the Holy Spirit, born of the Virgin Mary.”

The Apostle’s Creed is old – but age hasn’t diminished its truth or its importance. As we make our way through the Creed, line by line, this week we look at the statement regarding the Virgin Birth of Jesus. Simply put, the Creed affirms that Jesus had no earthly or human father, but was “conceived by the Holy Spirit.” It then declares that He was indeed born, but born by a woman (Mary) who never before had intimate relations with a man (the Virgin Mary). This says three important – indeed, absolutely essential – things about Jesus Christ.

First, it says that He is God, because His conception was absolutely and uniquely divine. Second, it says that Jesus is a man, because He was born of the Virgin Mary – just like any baby is born. Though His conception was absolutely unique, His birth was just like that of any baby. Third, it refers to a great truth theologians have called “The Incarnation.” It refers to the event and the phenomenon of God becoming man. The New Testament teaches over and over again that Jesus is both fully God and fully man (John 1:1-2, 14; Romans 1:3-4; 8:3; 9:5; Galatians 4:4; Philippians 2:5-8; 1 Timothy 3:16; Hebrews 4:14-15). The fact of the incarnation is clearly stated; but the meaning of the incarnation is also important to understand.

First, we should understand what the incarnation isn’t. It isn’t that Jesus is part man and part God; He is fully man and fully God. It isn’t that Jesus was God “on the inside” and human “on the outside.” It isn’t that Jesus was only human in His “flesh” and only God in His “spirit.” The incarnation is not subtraction, but addition. Jesus did not empty Himself of the Divine nature or any Divine attribute, but He only emptied Himself of His status of equality with the Father, taking a subordinate position by an act of His will (Philippians 2:5-8). Though Jesus could let go of His status, He could never stop being God. Some have taught that Jesus “lost” His deity when taking our sin on the cross; but if Jesus could ever stop being God, He could have never been God to begin with.

So what is the incarnation? It is when the eternal Son of God, the Second Person of the Holy Trinity, added humanity to His deity. He never became less God, but He added a human nature to His divine nature, and so became one person with two distinct natures, functioning together in perfect harmony. If it sounds strange to you, consider that in a sense, every human is one person with two natures, each inherited from their parents, and every child is “fully” the son or daughter of each parent.

We should also remember that the humanity that Jesus added to His Divine nature was not the sinful humanity we commonly know, but the perfect humanity of Adam and Eve. If you look at your own human nature and wonder how it could ever be joined with a divine nature, remember that Jesus’ humanity was certainly more compatible with deity than ours.

Finally, we must remember that Jesus remains “incarnated” eternally (Acts 7:55-56; 1 Timothy 2:5). He did not relinquish His human nature when He ascended into heaven. Now He is still fully God and fully man, but a man in a resurrection body, as we will one day have.

The incarnation says that man really is made in the image of God (Genesis 1:26 – click here for more on the idea of man in God’s image) and that perfect humanity is more compatible with deity than we usually imagine. The incarnation says that our problem is not our humanity, but our fallenness. To say “I’m only human” is wrong, because Jesus was fully human yet perfect. It is more accurate to say “I’m only fallen.” The incarnation is important because it tells us of His great love and compassion for man. We could understand why man would want to be God, but we cannot understand why God would ever want to be man. The incarnation means there is a God in heaven who knows what we go through – not only in theory, but in actual practice, He knows. It means that God does not ask of us what He has not done Himself.

His Hands Are Still Stained
Scroll to top