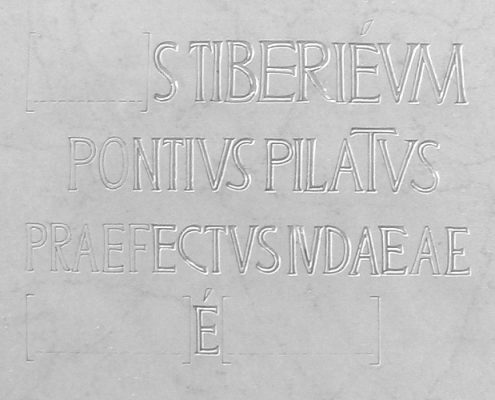 His Hands Are Still Stained

The Apostles’ Creed is probably the most well-known – and agreed to – statement of belief among Christians that doesn’t come straight from one Biblical passage. For centuries, Christians have united around this simple statement of the essentials of the faith. In the earliest church, the creed was a statement of faith required for those who would be baptized. Before they could express a public devotion to Jesus, they had to demonstrate their understanding and agreement with the truths of the Apostles’ Creed.

Some people think that this line – “suffered under Pontius Pilate” – is the strangest line in the Apostles’ Creed. Why should this be an essential of the faith? Why would understanding this statement and agreeing to it be required of a true Christian?

The Bible makes it clear Pontius Pilate was the Roman official that supervised and approved the torture and crucifixion of Jesus. Each one of the Gospel writers refers to this: Matthew (27:24), Mark (15:15), Luke (23:24), and John (19:15-16). The fact was noted in the preaching of Peter (Acts 3:13) and Paul (Acts 13:28). To say, “I believe Jesus suffered under Pontius Pilate” is just another way of saying, “I believe the Bible is true and historically accurate.” Sadly, some people don’t believe the Bible is historically accurate, but this is essential for a genuine Christian. We don’t believe in fairy-tale stories, but in a real God who acts in real human history.

Of course, the Bible stands up in its credentials as a historical document despite the doubts of the skeptics. Names, places, dates, empires, and events described by the Bible have time and again been found to be true. At one time it was thought that archaeology would disprove the Bible; now many or most archaeologists agree that their field has shown the Bible to be an accurate historical record. After all, the center of Christianity is what Jesus did for us on the cross. If history never saw a real Jesus, a real cross, a real empty tomb and a real Pontius Pilate, then the center of Christianity is simply a lie. But it isn’t a lie. When Pilate served in Judea, his headquarters were in the city of Caesarea. In that city, archaeologists discovered a stone from a building inscribed with the name Pontus Pilate. He really lived, he really ruled, and he really sentenced Jesus to suffering and death.

Pilate is one of the most fascinating and complex characters of the New Testament – but also one of the most tragic. Matthew 27:24 describes a memorable scene: When Pilate saw that he could not prevail at all, but rather that a tumult was rising, he took water and washed his hands before the multitude, saying, “I am innocent of the blood of this just Person. You see to it.” Click here to dig deeper into this amazing passage. Pilate tried to wash his hands of the responsibility of rejecting Jesus Christ, yet he couldn’t do it. He could not avoid this responsibility and his guilt is forever echoed in the Apostles’ Creed. For centuries Christians have declared that Pontius Pilate’s hands are still stained.

A Man, But More Than A Man