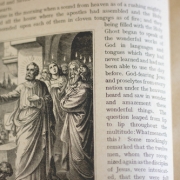 But Peter, standing up with the eleven, raised his voice and said to them, “Men of Judea and all who dwell in Jerusalem, let this be known to you, and heed my words.” (Acts 2:14)

Acts 2 describes a series of remarkable events. As the 120 disciples of Jesus gathered in an upper room, first there was an unusual sound. Then there were one-of-a-kind little flames of fire that strangely appeared above the heads of everyone in the upper room. Then, they spontaneously began to praise God and declare His marvelous works in languages they had never spoken before. This is called the gift of tongues, and it is spoken about in several other Bible passages. 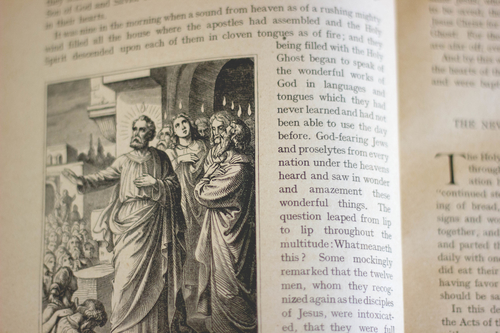 On a day of strange things, the best thing was yet to happen. We come to that starting at verse 14: Peter, standing up with the eleven. What a sight! Peter standing together with the other apostles, ready to speak to the amazed multitude.

When Peter raised his voice, it was the start of an amazing sermon. Standing with the eleven, Peter stood and preached to the crowd as a representative of the whole group of apostles.

We should notice that the speaking in tongues stopped when Peter began to preach. The Holy Spirit now worked through Peter’s preaching and would not work against Himself through the speaking of tongues at the same time.

When Peter raised his voice, it was also evidence of a remarkable change in Peter. Now he displayed a courage and boldness that was a complete contrast to the way that he denied even knowing Jesus when his Savior was arrested. All that was before being filled with the Holy Spirit. Now, Peter was a different man.

On the Day of Pentecost Peter didn’t teach as the rabbis in his day usually did, who gathered disciples around them, sat down, and instructed them and any others who might listen. Instead, Peter proclaimed the truth like a herald.

This remarkable sermon had no preparation behind it – it was spontaneously given. Peter didn’t wake up that morning knowing he would preach to thousands, and that thousands would embrace Jesus in response. At the same time, we could say that this was a well-prepared sermon; it was prepared by Peter’s prior life with God and relationship with Jesus. It flowed spontaneously out of that life, and out of a mind that thought and believed deeply.

It is good to remember that what we have in Acts 2 is a small portion of what Peter actually said. Acts 2:40 tells us this: and with many other words he testified and exhorted them. Like almost all the sermons recorded in the Bible, what we have is a Holy Spirit inspired summary of a longer message.

That message came through a man changed by the power of the Holy Spirit, and it’s not too much to say that what began with Peter’s sermon changed the world. Let the life-changing power of the Spirit have free reign in your life today.