Now there was a famine in the days of David for three years, year after year; and David inquired of the Lord. And the Lord answered, “It is because of Saul and his bloodthirsty house, because he killed the Gibeonites.” (2 Samuel 21:1)

People don’t always get wiser as they get older, but King David certainly did. In the face of a national crisis, he did the right thing – David inquired of the Lord. This means that David wisely sought God in the face of chronic problems. David was concerned after the first year of famine, and even more concerned after the second year. But two years of famine didn’t make him look to a spiritual cause. Yet after three years of famine, David inquired of the Lord. This shows that David didn’t see a spiritual reason in every problem; but he did not shut his eyes to the hand of God in circumstances. 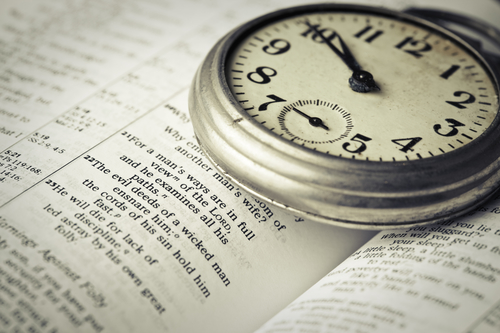 The first and second year he might see it as general test of the Kingdom of Israel. But as the famine continued for the third year, David thought there was something in it more than ordinary. Even though he knew that the natural cause was drought, he thought there might be a supernatural reason behind the natural cause.

As David inquired of the Lord, God showed him the problem. He said, “It is because of Saul and his bloodthirsty house, because he killed the Gibeonites.” This massacre isn’t recorded in 1 Samuel, but David didn’t question that it happened. Apparently at some time during his reign Saul attacked and killed many of the Gibeonites. The Kingdom of Israel as a whole had some hand in it, either because they approved it or didn’t oppose it. This made the Kingdom of Israel a partner to the crime, and so the whole kingdom suffered under the three-year drought.

Saul’s crime was worthy of judgment because “he killed the Gibeonites.” When David heard it was because of an attack against the Gibeonites, a chill probably ran up his back. He knew they were a people especially wrong for Saul to attack and kill. In the days of Joshua – more than 400 years before David’s time – Israel swore not to harm the Gibeonites, a neighboring tribe (Joshua 9). God expected Israel to keep their promise, even though the Gibeonites tricked Israel into making the agreement. Saul’s crime was not only in the killing of the Gibeonites but also in breaking this ancient and important oath.

The hand of judgment upon Israel in 2 Samuel 21 emphasizes many important principles.

Second, we see that time does not diminish our obligation to promises. “It was a long time ago,” one might say. Indeed, it was a long time – but the eternal God expects us to keep old promises as well as new ones. God held Israel to account for a 400 year-old promise.

Finally, we see that God’s correction may come a long time after the offense. Saul committed this crime many years before – at least 30 years before this time. God gave Israel plenty of time to see their error and correct the problem, but after many years God brought the correction Himself. If correction is not immediate, it may still be on the way.

The idea of time and promises shows us the failure of men, but it also shows us the glory of God. If God has such a high expectation that men keep their covenants, we have great confidence that He will keep His covenant with us. Revelation 4 tells us that surrounding the throne of God there is an emerald rainbow. The rainbow – way back from the days of Noah – is a reminder of God’s faithfulness to His promise. The sovereign God, seated on a glorious throne, wants to remember and keep every promise He makes to us. We can count on it, that every promise of His will be fulfilled over time.