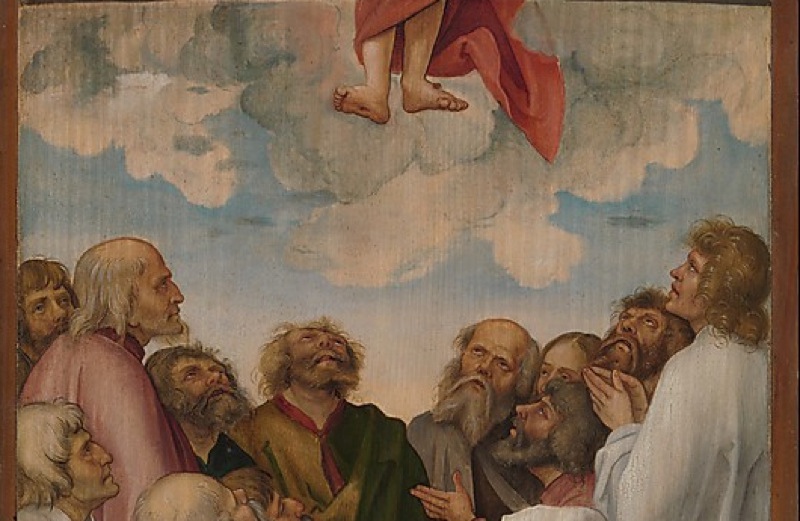 He ascended into heaven.

After Jesus rose from the dead, He met with His disciples many times. Eventually, after forty days, Jesus left this earth and – as the Apostles’ Creed says – He ascended into heaven. Why should this event in the life of Jesus deserve mention in this enduring statement of faith, the Apostles’ Creed?

The Ascension of Jesus is important because of how it happened. On a hill outside Jerusalem, called the Mount of Olives, Jesus met with His disciples one last time on this earth. He gave them final instructions, essentially saying: “Receive the power of the Holy Spirit, and then reach the whole world with the message of who I am and what I have done for each person.” Then, something remarkable happened. Jesus started to rise, and rise, and He kept rising. As He slowly disappeared into the sky, surrounded by a cloud, the disciples continued to gaze upward, looking, looking, and straining to see, until Jesus could no longer be seen. There’s no doubt that this was a dramatic exit. After His resurrection, Jesus didn’t always leave His disciples this way. Sometimes He just vanished – they looked, and He was gone (more on this in Luke 24:31).

So why did Jesus ascend this way? He certainly could have simply vanished to the Father’s presence in a secret sort of way. So with this ascension into heaven slowly rising until they could no longer see Him, Jesus showed His disciples that He was gone for good. He showed them that this was not like the previous times when He might appear, disappear, and reappear during the forty days after the resurrection.

Remember Jesus’ words to His disciples in John 16:7: It is to your advantage that I go away; for if I do not go away, the Helper will not come to you; but if I depart, I will send Him to you. Now the disciples could know that that promise would be fulfilled. Jesus was gone. It was time for the Holy Spirit to come.

There is one more aspect of He ascended into heaven that is precious. Luke 24:50 says, “And He led them out as far as Bethany, and He lifted up His hands and blessed them. Now it came to pass, while He blessed them, that He was parted from them and carried up into heaven.” When Jesus left this earth, He left blessing His people. His hands were raised in the position of a priestly blessing, and He spoke words of strength, comfort, and blessing as He was parted from them. His words continued as He went higher and higher, until the disciples could no longer hear them. The last words they heard from Jesus were words of blessing. He could have been critical, He could have been harsh, or He could have corrected them. But He wanted words of blessing to stay in their ears.

Know this: He left the earth blessing His people, and He hasn’t stopped blessing them, even from heaven. Jesus wants to bless you today.

Seated in Heaven
Scroll to top