And Absalom dwelt two full years in Jerusalem, but did not see the king’s face. Therefore Absalom sent for Joab, to send him to the king, but he would not come to him. And when he sent again the second time, he would not come. So he said to his servants, “See, Joab’s field is near mine, and he has barley there; go and set it on fire.” And Absalom’s servants set the field on fire. (2 Samuel 14:28-30)

Absalom murdered his brother Amnon in retribution for the rape of their sister Tamar.

Just typing out that sentence is hard. It describes a deeply disturbed family and shows that the Bible is a painfully honest book, exposing the painful trials in the life of a hero like David. David’s son Absalom escaped Israel after the murder, and finally came back to Jerusalem – yet David refused to see him. This was an awkward and dangerous half-reconciliation between father and son that went on for two years.

Absalom never wanted to make things right. He plotted the overthrow of his father’s kingdom and wanted to get closer to launch his plan. For just these reasons, David should not have ignored Absalom nor kept him at a distance. Yet David let this awkward situation linger for two full years. 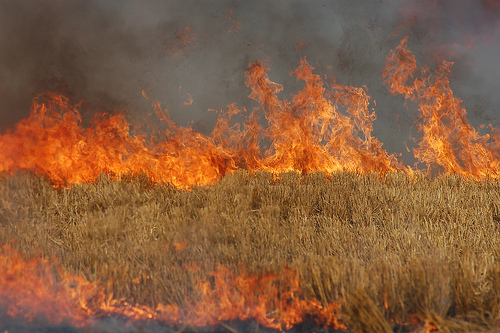 The matter needed to be resolved. Sadly, David did not initiate the resolution. Absalom thought to approach David through one of the King’s top assistants – Joab, his military commander.

When Absalom first approached, Joab ignored him. Then he ignored him a second time. Finally, when Absalom would not tolerate being ignored any longer, he simply burned Joab’s fields to get his attention. The plan worked and Joab arranged a meeting between King David and his estranged son Absalom.

Here are two points of application from this Old Testament passage.

First, in many ways Absalom is a good picture of our modern age. Absalom was amoral – he simply didn’t care about morality. Absalom was a great pragmatist – someone who believes that if something works, it is right. For the pragmatist, right and wrong are that easy – if burning Joab’s field gets Joab’s attention, then do it. It is good because it works.

It seems that in many ways modern culture (and the modern church) has warmly embraced pragmatism. We simply look to what works – especially, what works for us – and we call that good. Success is the ultimate good, and everything serves success. If you have to lie or cheat to succeed, then go ahead and do it. From the political lie to corrupt corporate accounting, pragmatism seems to rule.

Yet we know that God cares about more than immediate success. God cares about the heart, and can use even – perhaps especially use – our weakness and failure. Think about the difference in heart between Absalom and the Prodigal Son of Jesus’ parable. The Prodigal Son came back humble and repentant. Absalom came back burning Joab’s fields. How we do things matters to God, not only the end results.

Second, we can see another angle of application in this picture. We know that sometimes God gets our attention by setting our “barley field” on fire. We can picture God trying to get our attention just as Absalom tried to get Joab’s attention. Joab kept putting Absalom off – until the barley field was burned. Then Absalom had Joab’s full attention. Yet we should not think that God is amoral in this – there are many differences between the two situations. Most notably, Joab’s barley field belonged to Joab and not to Absalom. Yet God has a claim to everything we are and everything we have. If He “burns our barley field” He has a right to – since it ultimately belongs to Him anyway.

If your barley field is smoldering, maybe a loving God is requesting your full attention. The sooner you give it to Him, the better it will be for everyone.

The Clever Politician
Scroll to top