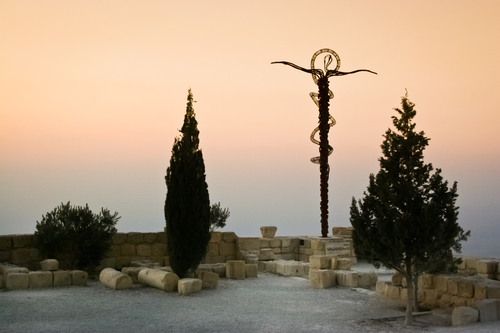 He removed the high places and broke the sacred pillars, cut down the wooden image and broke in pieces the bronze serpent that Moses had made; for until those days the children of Israel burned incense to it, and called it Nehushtan. (2 Kings 18:4)

After the fall of the kingdom of the norther tribes in 2 Kings 17, chapter 18 begins the story of Hezekiah, one of the best kings of Judah. In verse 3 it simply says of him, “He did what was right in the sight of the LORD.” Then we read about many of the right things that he did – beginning with his work against the idolatry in Judah.

We read that Hezekiah removed the high places. These were popular altars for sacrifice set up as the worshipper desired, not according to God’s direction. Many other kings of Judah – even some of the good ones – allowed these unapproved places for sacrifice.

We read that he cut down the wooden image, which was probably some wooden pillar used in the immoral rituals intended to honor the pagan goddess Ashtoreth.

Finally, we read in verse 4, and broke in pieces the bronze serpent that Moses had made. What was this all about?

Numbers 21:1-9 describes how during a time of a plague of fiery serpents upon the whole nation, Moses made a bronze serpent for Israel to look upon and be spared death from the snake bites. This statement in 2 Kings tells us that this particular bronze serpent had been preserved for more than 800 years, but Hezekiah looked at it and called it “Nehushtan.” Because he was so zealous to honor God, Hezekiah broke in pieces this bronze artifact and put an end to the idolatrous worship of this object.

This bronze serpent was a wonderful thing – when the afflicted people of Israel looked upon it, they were saved. It was even a representation of Jesus Christ, as Jesus Himself said in John 3:14-15. Yet people could take something so good, and so used by God, and make a destructive idol out of it.

In the same way, sometimes good things become idols and therefore must be destroyed. For example, if some precious artifact from Bible times was discovered, and then became an object of idolatry for many, it would be better to destroy that thing.

God’s people must likewise be on guard against idolatry today. There are many dangers of idolatry in the modern church:

The name Nehushtan means “piece of brass” and is a way to make less of this object that was made an idol. It’s always good for us to look for idols in our heart and mind, and to cut them down to size.

God alone deserves our worship and our ultimate obedience.

Never Taken Back
Scroll to top