David Guzik Sermons on the Book of Isaiah 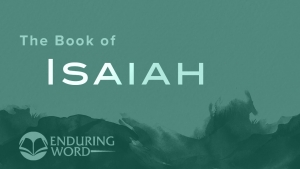 This is the book of the prophesies of Isaiah, the son of Amoz, who ministered from about 740 to 680 b.c. For about 20 years, he spoke to both the northern kingdom of Israel and the southern kingdom of Judah. After Israel’s fall to the Assyrians in 722 b.c., Isaiah continued to prophesy to Judah.

This period of Israel’s history is told in 2 Kings 15 through 21 and 2 Chronicles 26 through 33. Isaiah was a contemporary of the prophets Hosea and Micah. By the time of Isaiah, the prophets Elijah, Elisha, Obadiah, Joel, Jonah, and Amos had already completed their ministry.

By this time, Israel had been in the Promised Land for almost 700 years. The first 400 years in Canaan, Israel was ruled by judges, spiritual, military, and political leaders God raised up as the occasion demanded. Then, for about 120 years, three kings reigned over all Israel: Saul, David, and Solomon. But in 917 b.c. Israel had a civil war, and remained divided into two nations, Israel (to the north) and Judah (to the south) up until the time of Isaiah.

Up until the time of Isaiah, the northern nation of Israel had some 18 kings – all of them bad, and rebellious against the Lord. The southern nation of Judah had some 11 kings before Isaiah’s ministry, some good and some bad.

In the time of Isaiah, Israel was a little nation often caught in the middle of the wars between three superpowers: Egypt, Assyria, and Babylon.