This dramatic description tells the last few moments in the life of Stephen, the first martyr of the early church. As he exposed the sin of the important men of the council, they were convicted and filled with anger against him. 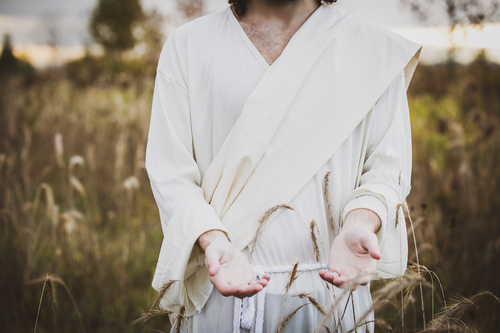 Then we read that Stephen saw the glory of God, and Jesus standing at the right hand of God. It is difficult to describe exactly what Stephen saw. We can’t say for certain if this was a personal vision or if some sort of “window to heaven” was opened.

We can suppose that Jesus was standing here in solidarity with Stephen at this moment of crisis. Jesus reacts when His people suffer. Some of the ancient Greeks thought that one of the qualities of the gods was what they called apathia – they were “apathetic,” not caring about the problems of earth. That’s not the God of the Bible, perfectly represented in Jesus Christ. Jesus noted the great suffering of Stephen.

We might also consider that Jesus stood to give a standing ovation to Stephen, whose fate made him unique among believers. Among all the followers of Jesus, Stephen was the first martyr. There were many to follow, but only one could be first, and that was Stephen.

This reminds us of what Jesus said in Matthew 10:32: Therefore whoever confesses Me before men, him I will also confess before My Father who is in heaven. Jesus also stood in support of Stephen, assuring that though he was found guilty and punished on earth, Stephen was found righteous and rewarded in heaven. Jesus did for Stephen exactly what He promised in Matthew 10:32.

Many millions have died for Jesus since the time of Stephen, but they are a small percentage of all the disciples of Jesus through history. Most of us are not called to die the death of martyrs. Yet as God gives us the courage and the strength day by day, we can live the life of a martyr. In our own way, we can confess Jesus and see Him confess us before His Father in heaven.