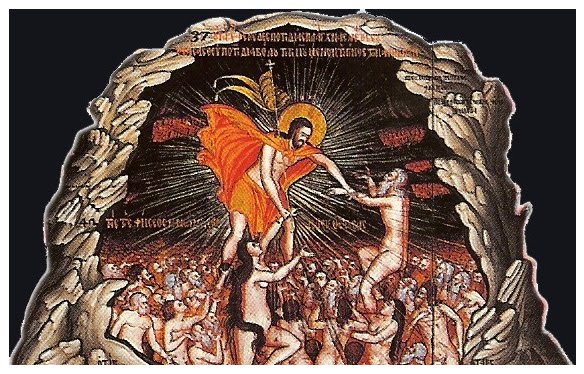 He descended into hades.

The Apostles’ Creed is an ancient, worthy, and wonderful summary of basic Christian belief. Many think it came to be as a statement of faith for new Christians to understand and affirm before baptism. Of all the statements in the Creed, these four words might be the hardest to understand. What does it mean to say, “I believe that Jesus descended into Hades”?

The Bible tells us that when Jesus died, and was laid in the tomb, he went to the place of the dead – known in the Bible as “Hades” or “Sheol.” Peter, preaching in Acts 2:31, declared that an Old Testament prophet spoke concerning the resurrection of the Christ, that His soul was not left in Hades, nor did His flesh see corruption. So perhaps the most important fact about Jesus and Hades is that He didn’t stay there! Still, He certainly did visit Hades as His body lay in the tomb.

If Jesus went to Hades, what did He do there? First, we should say what He did not do. He did not go to Hades as a victim or prisoner of Satan and somehow perform more payment for our sins after His work on the cross. Satan isn’t the master of Hades or hell, and Jesus finished His work of paying for our debt of sin at the cross. When Jesus said, It is finished (John 19:30), He meant it. So our question still remains: what did Jesus do in Hades?

Here’s how many think it worked. Before the finished work of Jesus on the cross, the debt of sin was not truly paid. For this reason, the righteous dead before the time of Jesus could not go to heaven, because their debt of sin had not been completely paid. It had been covered with an IOU – a promise of payment to come. The righteous dead went to Hades, the abode of the dead – and they waited in a place of blessing and comfort until the finished work of Jesus (Luke 16:19-31). When Jesus paid for all of those IOUs at the cross, He then led all of the righteous, waiting dead into heaven, because the price had been paid. This work of Jesus in Hades is described in passages like Ephesians 4:8-9, Isaiah 61:1, and Hebrews 11:39-40. But that isn’t all Jesus did in Hades. He also had something to say to those who were in this abode of the dead, but not in the place of blessing and comfort.

1 Peter 3:18-19 also tells us that Jesus preached in Hades: “For Christ also suffered once for sins, the just for the unjust, that He might bring us to God, being put to death in the flesh but made alive by the Spirit, by whom also He went and preached to the spirits in prison.”

Apparently, this work was done in the period after Jesus’ death, but before His first resurrection appearance to the disciples. Jesus went to Hades – the abode of the dead – and preached to the spirits there. But why would Jesus preach to these imprisoned spirits? In all probability, this was “preaching” (the proclamation of God’s message) but not “evangelism” (the proclamation of good news). Jesus probably preached judgment to these disobedient spirits. The Bible says that even those under the earth must acknowledge Jesus’ ultimate Lordship. Jesus went to Hades and announced this truth: that at the name of Jesus every knee should bow, of those in heaven, and of those on earth, and of those under the earth. (Philippians 2:10)

Those in Hades were the forgotten ones of this earth. They had passed from this life long before; but God didn’t forget them. An important – though obscure – part of Jesus’ ministry was to minister to these forgotten ones. Take it as encouragement today – that you are never, ever a forgotten one before God.

Just Like He Said He Would
Scroll to top