Speak these things, exhort, and rebuke with all authority. Let no one despise you. (Titus 2:15)

These words from the Apostle Paul come at the end of a long section where he told Titus how to lead the churches on the island of Crete. Titus chapter 2 is filled with practical guidance for the pastor and the church leader, and the chapter ends with this interesting statement. Paul told Titus, “Speak these things, exhort, and rebuke with all authority. Let no one despise you.” 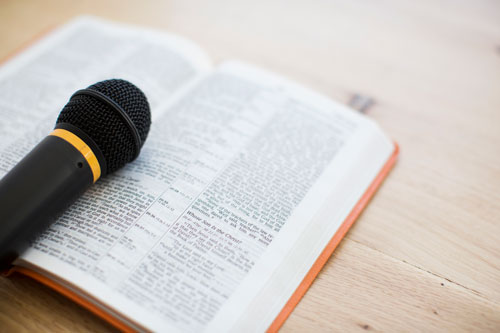 The first thing is to speak these things. Titus, and every one of God’s messengers of grace are directed to speak the things of God’s Word. What Paul wrote to Titus (these things) was and is God-inspired Scripture.

We could have an interesting discussion over the question, “Did Paul knowwhat he wrote was Scripture?” But it really doesn’t matter if Paul was aware of it or not. God guided Paul and the other human authors of Scripture, enabling them to write His inspired Word through their own human personality.

These things were to be the focus of what Titus taught. The preacher must always stay centered on God’s Word.

Next, Paul told Titus to exhort and rebuke– and to do it with all authority. God’s messengers are to remember that they are messengers from a King, holding the word that brings life and turns back hell. The preacher needs to speak forth God’s Word, exalting it high above human opinion and speculation. When the preacher speaks, sometimes it will be encouraging (exhort) sometimes correcting (rebuke).

Finally, Paul told Titus, “let no one despise you.” This didn’t happen by Titus making a rule saying that Christians weren’t allowed to despise him. It happened because Titus lived a life of love and integrity. If Titus spoke with all authority, he had to back it up with his life. Titus had to live in such a way so that no one could rightfully despise him or his message.

One commentator points out that it was common for these letters from Paul to be read in the churches. Therefore, this remark, “let no one despise you,” was also something for the Christians and Crete to hear. When they saw Titus living an honorable and godly life, they had to step up and respect him and his message, even when it was a rebuke.

I’m sure that at some point this week God will have a word to encourage you (exhort) or to correct you (rebuke). Be ready to receive either word and to respond to it.