Upon your arrival to Ben Gurion Airport, you will be met by your representative and transferred to your hotel in Tel Aviv. Dinner and overnight in Tel Aviv.

Depart from Tel Aviv and travel north to Caesarea Maritime, and see the excavations of the Crusader city and the Roman port, aqueduct and the amphitheater. Continue north and inland to Mount Carmel for a panoramic view of the city and the bay. Proceed to Megiddo, a national park that is recognized as the site of Armageddon in the Christian book of Revelation. End our day driving to our accommodations at the Sea of Galilee

Today we visit Capernaum and visit the remains of the 2nd century synagogue and the house of St. Peter. We then proceed to Tabgha, the site of the miracle of the fish and loaves. Continue to the Mount of the Beatitudes, the place where Jesus delivered the Sermon on the Mount. Enjoy the famous St. Peter’s fish lunch in one of the local restaurants around the Sea of Galilee. In the afternoon we will enjoy a boat ride on Galilee, and visit the ruins of Bethsaida.

Depart Galilee toward Mt. Hermon to visit Tel Dan, and the Springs at Banias. As we drive we will visit Magdala, on Galilee. Additionally we will see the Golan Heights. In the afternoon proceed to Yardenit, the baptismal site on the Jordan River. 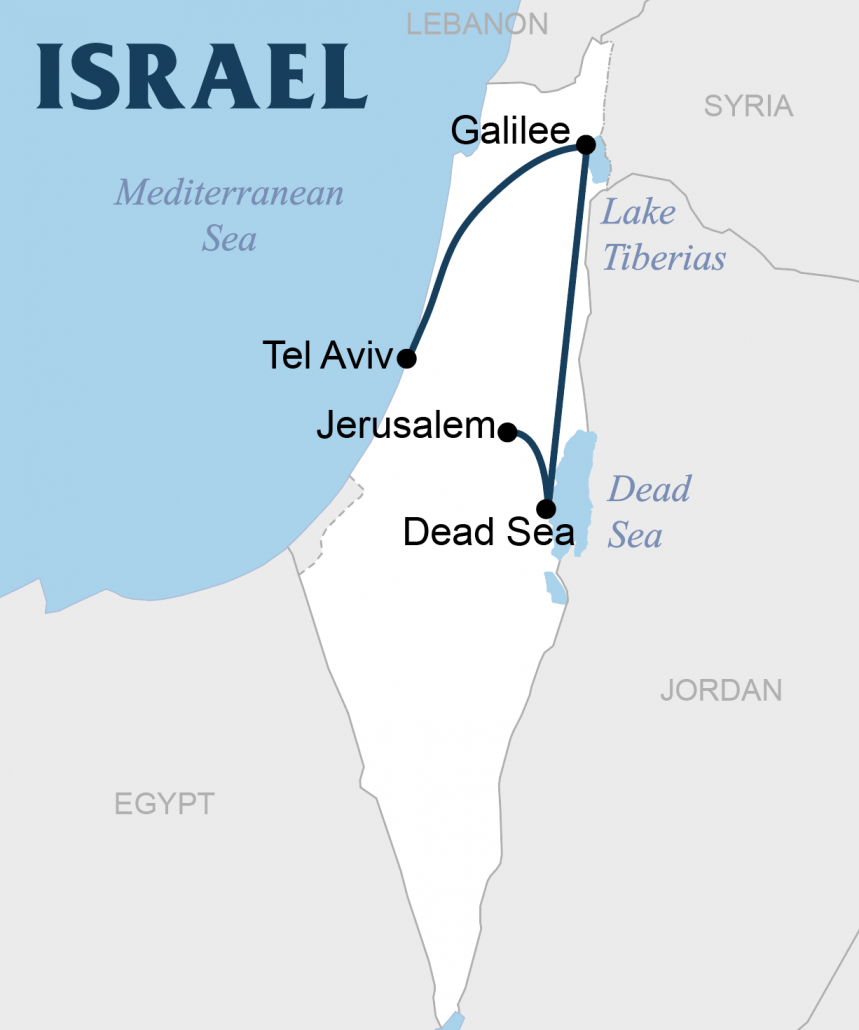 Depart the Sea of Galilee and proceed to Beit Shean. Visit the excavationsbof the former Roman city. Proceed to Jericho of Israel’s entrance into the Promised land. From there wecontinue to the Dead Sea, for an evening of free time and swimming

Ascend by cable car to the top of Masada and tour the ancient fortress where the Zealots made their last stand against the Romans before committing mass suicide in 73AD. Time to shop at Ahava Shop at Masada. Visit oasis of Ein Gedi, famous at the time of King David’s flight from Saul. Our last stop for the day will be at Qumran to visit the site where the Dead Sea Scrolls were found. Drive through the Judean Desert to the Golden city of Jerusalem.

Enjoy the view of the Old City from the summit of the Mount of Olives. Walk down the Palm Sunday road to the Garden of Gethsemane, the Church of all Nations and the Basilica of the Agony. From there we will visit the Western Wall, the Pool of Bethesda, and walk through the Old City, following the Via Dolorosa to the Church of the Holy Seplecure.

The rich history of Israel has produced some of the greatest archeological finds in the world. Today we will see some of them, visiting the Israeli National Museum, the Shrine of the Book (Dead Sea Scolls) Museum, and a scale model of Jerusalem at the time of Christ. We will end our day at an overlook of Bethlehem and the shepherd’s fields.

Returning to the Old city we will visit the ancient City of David, the Southern Steps of the Temple at the Davidson Center, and the Western Wall and Western Wall Tunnels. We will end our day at the Garden Tomb for communion.

INCLUDED IN THE PRICE: Roundtrip coach class air transportation between LAX, CA and Tel Aviv, returning from Tel Aviv or Amman if remaining for extension; airport taxes and fees. Airfare subject to change due to Amman departure, and originaton other than LAX. NOT INCLUDED: Optional Travel Insurance; Miscellaneous expenses such as individual transfers, passport & visa fees, laundry, beverages at included meals, meals not mentioned in the itinerary, and all items of a personal nature; additional gratuities for exceptional service; any increase in airport taxes, fees, and/or fuel surcharges imposed after the printing of this brochure. AIRFARES & AIRLINE POLICY: Airfares purchased in conjunction with this cruise are based on round trip contracted fares. Airport taxes and fees are subject to change until tickets are issued. Any changes to the group itinerary, including change of dates, are subject to additional costs in airfares, airline deviation fees and/or services these changes can incur. Name changes due to spelling corrections, or to match passport names are subject to airline rules, and penalties for re-ticketing will apply. Tickets are non-refundable once issued. Please check with the respective airline for baggage allowance. In most cases, airlines allow one bag per person to be checked, plus a small carry-on. Excess baggage charges are the sole responsibility of the passenger. RESPONSIBILITY & AGREEMENT: Plaza Travel has made the travel arrangements for this trip, as an intermediary or agent for the transportation carrier and other suppliers of services connected with the tour, all of which are independent contractors. Plaza Travel in no way owns or operates the vehicles or facilities to be used during the tour and assumes no responsibility for the negligent acts and/or omissions of these independent contractors, their employees, agents or representatives. All bookings are accepted subject to the conditions imposed by these contractors and Plaza Travel will make no refund in the event of their delay, cancellation, overbooking, strike, act of terrorism, or force majeure.