Escape While You Can

Then it happened one evening that David arose from his bed and walked on the roof of the king’s house. And from the roof he saw a woman bathing, and the woman was very beautiful to behold. (2 Samuel 11:2)

It wasn’t the only time of spiritual decline in the life of King David, but this episode of adultery was the most notorious. This tragic scandal began many years before, as David lived year after year, adding wives until he had four or five, without properly restraining the passions of his flesh. The years of unrestrained passions set the stage, but the moment of temptation provided the opportunity.

Our verse tells us that David arose from his bed and walked on the roof. The Hebrew verb form of walked suggests that David paced back and forth on the roof. He couldn’t sleep and was uneasy – uneasy because he wasn’t where God wanted him to be. As he paced back and forth, he saw a woman bathing. There is little doubt that this woman (later called by the name Bathsheba) acted immodestly. Though it was evening and apparently the time when most people were asleep, certainly she knew that her bath was visible from the roof of the palace. Any immodesty on her part did not excuse David’s sin, but she was still responsible for her wrong. 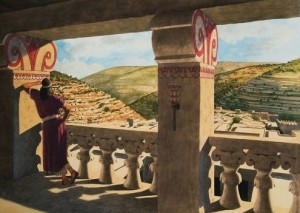 Nonetheless, David saw a woman bathing. David’s sin was not in seeing this woman. It is unlikely that he expected or planned to see her. David’s sin was in choosing to keep his eyes on an alluring image after the sight came before his eyes. Christians – both men and women – must learn to never let their eyes (or their mind) rest on alluring images except for what “belongs” to them in marriage. Our eyes must “bounce” off of any impure yet alluring image that comes in sight.

Yet David didn’t. He indulged himself a lustful look at the bathing beauty. This shows us that David’s many wives did not satisfy his lust. It wasn’t because there was something lacking in all or some of those 4 or 5 women. It was because you can’t satisfy lusts of the flesh, because they are primarily rebellious assertions of self. It wasn’t so much that David wanted the bathing beauty; it was that he would not be satisfied with what God gave him.

The life of David’s son Solomon illustrates this principle in an exaggerated way. Solomon had 700 wives and 300 concubines. David and Solomon show us that if one woman isn’t enough, then 1000 women aren’t enough. The problem isn’t in the marriage partner you have; the problem is deep within you.

Yet, our verse also tells us that the woman was very beautiful to behold. But the real strength of temptation often does not lie in the nature of the tempting object, but in the state of heart and mind of the one being tempted. Even so, this temptation was not too strong for David, no matter how beautiful the woman was. For example, Joseph was more severely tempted to commit sexual immorality than David was here, but Joseph fled that temptation.

Through this entire tragedy, God gave David many avenues of escape. The easier avenues come first, but as the temptation builds momentum, the ways of escape become more difficult. In this sense temptation becomes like a train – when it rolls slowly it is easy to jump off, but as it builds up speed it requires more courage to escape. This should leave us with two thoughts. First, the time to escape temptation is at its early stage. Second – in regard to the temptation you may face right now – there will never be an easier time to say “no” than now. If you think “no” will be easier tomorrow, you are mistaken – perhaps tragically so.

Start of a Shameful Season