Devising Means for the Banished

For we will surely die and become like water spilled on the ground, which cannot be gathered up again. Yet God does not take away a life; but He devises means, so that His banished ones are not expelled from Him. (2 Samuel 14:14)

This is one of the best gospel texts of the Old Testament – and it has an intriguing background. It came from the period of David’s struggles with Absalom, his most ambitious and difficult son. In the aftermath of David’s sin with Bathsheba, he faced one crisis after another in his family life. It began when David’s son Amnon raped his own half-sister Tamar. In retribution, Absalom murdered Amnon – and he left the country, finding safety in a foreign capital. Banished from the Kingdom of Israel, Absalom waited until his terrible crime was no longer front-page news, and then put into play a plan to come back to Israel.

He needed an inside man – an advocate to make the case before his father, King David. Finding no willing helper, he terrorized the normally unshakable Joab into representing his need before David. Joab brought the problem to David in a clever way – through a poor, widowed woman who told a false story meant to pull on David’s heart. The idea was to convince David that though it was terrible to lose one son to murder, it was worse to lose another son to banishment and exile. 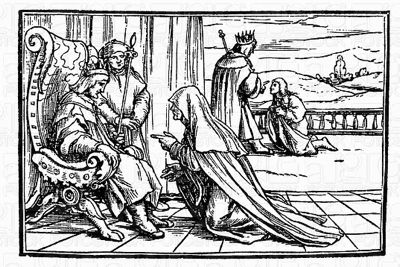 When we come to 2 Samuel 14:14, the poor widow woman – known as “The Woman of Tekoa” because of her hometown – is directly applying the point of her clever story to David. She spoke boldly to David, confronting his sin of not initiating reconciliation with Abasalom. Because he was estranged from David and growing more and more bitter, Absalom was a threat to Israel and David allowed it. Her plea for urgency made two points.

First she said, “We will surely die and become like water spilled on the ground.” The woman of Tekoa wisely spoke to David about the urgency of reconciliation. “David, we all die and then the opportunity for reconciliation is over. Do it now.” When someone dies and the survivors have unresolved matters with the deceased, they wish they had listened to the woman of Tekoa’s advice.

Her second point was even more compelling. She told David, “But He devises means, so that His banished ones are not expelled from Him.” The woman of Tekoa meant, “Find a way to do it, David. God finds a way to bring us back to Himself.” It is true that God finds a way – but not at the expense of justice. God reconciles us by satisfying justice, not by ignoring justice.

This is the background to one of the best gospel texts in the Old Testament. If we are under the chastening of God, we may feel like banished ones. Yet we can recognize our place of being His banished ones, belonging to Him and trusting Him to bring us back to Him. God devised a way to bring the banished back to Him, that they might not be expelled from Him. The way is through the person and work of Jesus, and how He stood in the place of guilty sinners on the cross, receiving the punishment that we deserved.

When the woman of Tekoa applied this second point, she spoke to far more than David. At that moment the Holy Spirit inspired her and she unwittingly spoke across the centuries. If God has brought you to Himself, then you must take a sober inventory of life. Who have you banished? Who are the exiles from your heart? Since God went to such lengths to bring us back, we should extend our self to our own banished. We need to hear the sermon from the woman of Tekoa.

More than Only the Spirit