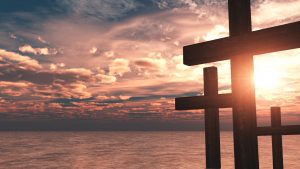 “Was crucified, dead, and buried.”

The Apostle’s Creed is an ancient statement of faith, agreed to universally among Christians. It contains the essentials of Christian belief, and in ancient times was used as a baptismal creed to make sure that new converts knew the basic truths of the faith. There may not be a more important line in the creed than what we consider here: that Jesus was crucified, dead, and buried. Clearly, the creed drew on Paul’s description of the gospel in 1 Corinthians 15:3-4: “For I delivered to you first of all that which I also received: that Christ died for our sins according to the Scriptures, and that He was buried, and that He rose again the third day according to the Scriptures.”

Crucifixion began with a whipping known as scourging, tearing open the victim’s back. Jesus was clothed in some way after the scourging (Matthew 27:26-31), but the wounds on His back were traumatized again when those clothes were removed at the place of crucifixion. Then, when Jesus was thrown on the ground to nail His hands to the crossbeam, the wounds were again torn open and contaminated with dirt. Each breath on the cross further aggravated the painful back wounds scrapping against the rough wood of the upright beam.

When the nail was pounded through the wrists, it severed the large median nerve. This stimulated nerve produced excruciating bolts of fiery pain in both arms, and often resulted in a claw-like grip in the victim’s hands.

Beyond the pain, the major effect of crucifixion was to restrict normal breathing. The weight of the body pulled down on the arms and shoulders, making it easier to breathe in than to breathe out. Because the victim couldn’t breathe properly, the muscles began to cramp and this made it even harder to get a good breath. To get a good breath, one had to push from the feet – but this was also terribly painful. Lifting the body for a breath also painfully scraped the back against the rough wooden post. Each effort to get a proper breath was agonizing, exhausting, and led to a sooner death.

Death from crucifixion might have several different medical causes: acute shock from blood loss, exhaustion induced respiratory failure, dehydration, stress-induced heart attack, or congestive heart failure leading to a heart rupture. If the victim did not die quickly enough, the legs were broken, and the victim was soon unable to breathe at all. Click here for more on the medical aspects of crucifixion.

The creed also points out that Jesus was buried. We don’t often think of the burial of Jesus as important, but it is. It was proof positive that He really died, because you don’t bury someone unless they are really dead and Jesus’ death was confirmed at the cross before He was taken down to be buried (John 19:31-37). Jesus’ burial is also important because it fulfilled the Scriptures which declared, “And they made His grave with the wicked; but with the rich at His death” (Isaiah 53:9).

It’s important to notice that this core statement of Christian belief regards things that happened – actual, real, historical events. The gospel isn’t a matter of religious opinions, platitudes, or fairy tales, but about real historical events. On a real day at a real place among real people, Jesus of Nazareth was crucified, dead, and buried. We have a faith founded on facts.

His Hands Are Still Stained

Feeling the Heat
Scroll to top